Today was our trip out to the Warner Brothers Harry Potter Studio tours, which is over 30KM outside London, and the nearest train station is Watford Junction. What is hidden in the small print is that if you take a "normal" train to Watford junction, its a 45 minute ride on that line, but if you get a midlands train service from Euston Station, its just under 20 minutes as it skips almost every station on the line. It would seem lots of people make this mistake. When you don't fully understand the London tube/train network it is a bit of a nightmare, in essence it took us three train lines and a bus transfer to get to the studio. Almost 2 hours.

We cast a magical digital spell to fit a family of 5 in a small Ford Anglia. Hope the same spell works on our luggage for our BA flight from London to Rome ! 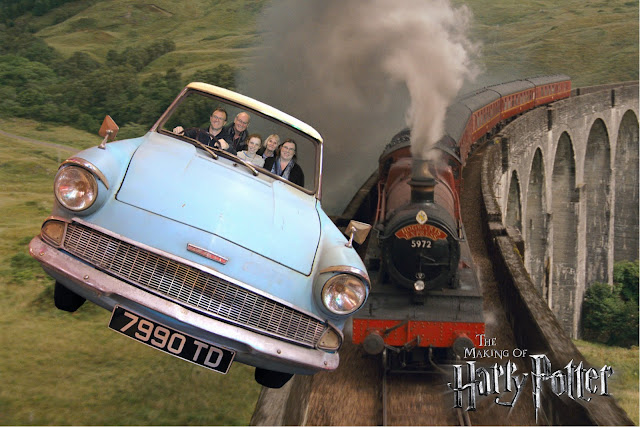 The app I had for the tube plans on my phone didn't tell me about this fast train from Euston option and sent us on the "slow" train. If you are in central London, the key if to make sure you get to Euston station so you can get this train. It doesn't cost any more or less than the other train and you can use an Oyster card (similar to our Opal card), so in essence it took us 80 minutes to get there when we could have done the entire trip in less than an hour. We got the fast option on the way home.... (the Transport for London website seems to be slightly better at "unlocking" this fast train option, but always plan the journey with Euston St station as a stop, i.e plan 2 trips). Whilst the tube trains run every 2-3 minutes, the overland trains are more like Sydney trains and tend to be 15 minutes or 30 minutes apart.

If you select your start station (in our case Liverpool St) to Watford junction, its 70 minutes (but took as 80+ as we missed the 1st overground service)

Plan it as a trip from Liverpool to Euston, then Euston to Watford junction, and then its about 45 minutes with a short wait between trains.

The Studio tour itself is excellent in that you will see most of the props from the movies, see how things were made, have the opportunity to have your photo taken in multiple props and buy heaps of Harry Potter merchandise from the various stores located within the studio, and try Butterbeer. I thought it was sickly sweet and disgusting, but the others thought it was OK. The Butterbeer Ice Cream was quite nice though.

Emma and Sharon were both very excited about attending the tour, and they were not disappointed. Some of the props they have are just amazing, and I was surprised at how much they did with actual animatronics rather than digital effects. The food options at the cafe are pretty good, but of course expensive. The cafe isn't really big enough and even at 3pm we struggled to find a table.

If you want to see the video that Emma was in where she is flying on a broom stick, you can check it out at this link here. There is some general WB marketing guff for the first part, but fast forward through to the 2 minute part where Emma is.

The tour isn't a theme park, its an actual studio, however its set up like a theme park so the downside with the tour is that you seem to queue everywhere. Thankfully most of them didn't take all that long, except the main entry and broomstick video. The queues were :-
The other thing is that you need to bring your money with you, from the moment you think about going you are on a Harry Potter Cash Extraction Rotolactor which is just milking money out of you at every single point. Its a great day, but its not cheap. Almost a bad as the Easter show as far as cash extraction goes.
So the entire day cost almost £300... (double that for Aussie equivalent). I reckon the worst bit was the £7.50 for the bus, its a studio bus, they should include it in the cost of the ticket. And there were quite a few photo things we didn't do, or buy a £26 wand so you could easily spend far more cash. At the shop one fan next to us spent £250 on merchandise. Even though it cost a small fortune it was heaps of fun and I would recommend going out there. They tell you you can go through in 3 hours, but allow an entire day.


Waiting out of the cold for the train. Its still cold in here, but at least out of the wind a little. It was below 10c for most of the day. 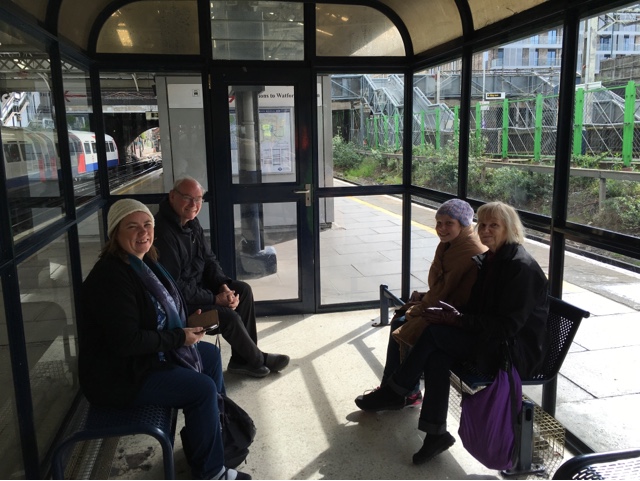 Queuing for the bus. 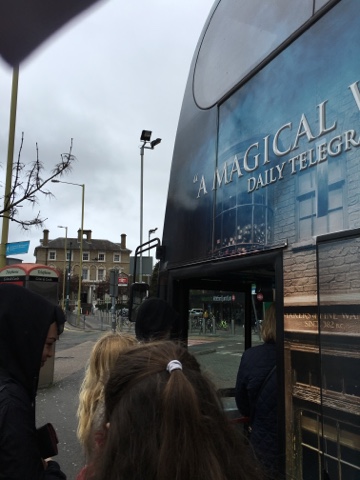 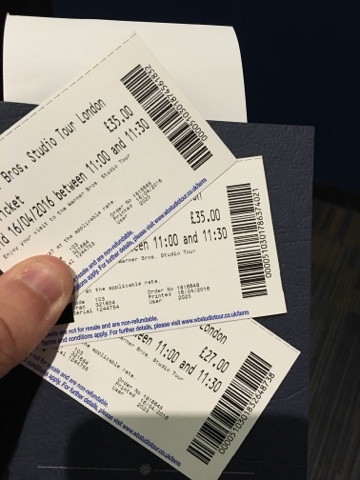 Everyone sees this after buying coffee. The queue was slow enough that it wasn't actually an issue 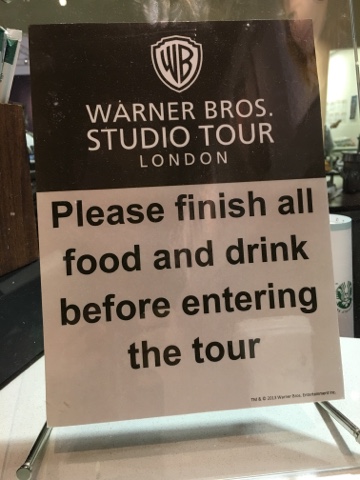 The queue behind me to get in. Yep its a Far Queue. 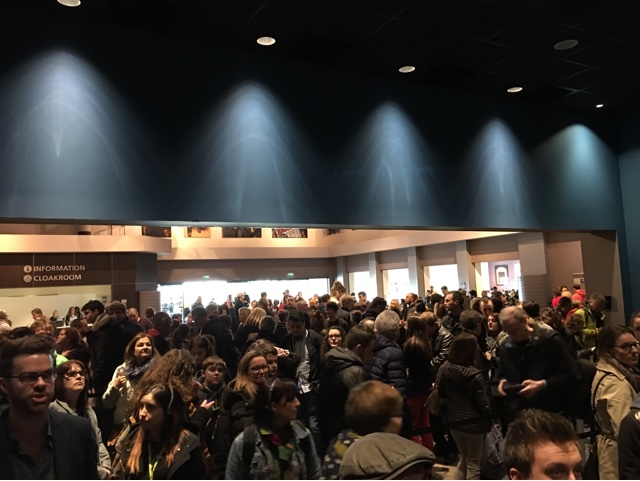 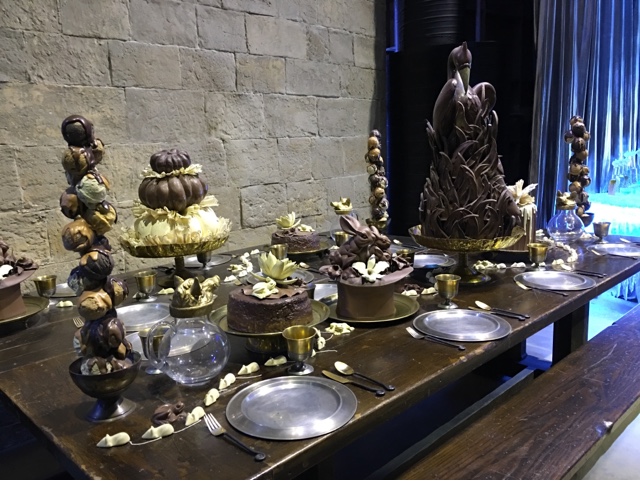 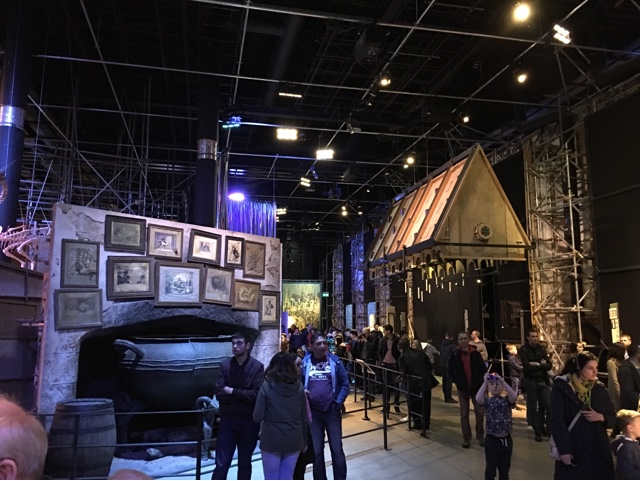 An optical illusion of forced perspective. Its only about 2m deep, but looks way longer 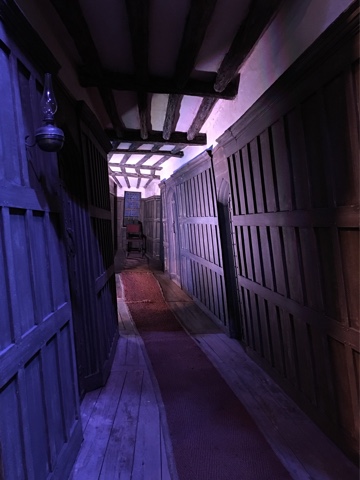 This gives a better idea of how "large" the corridor isn't. 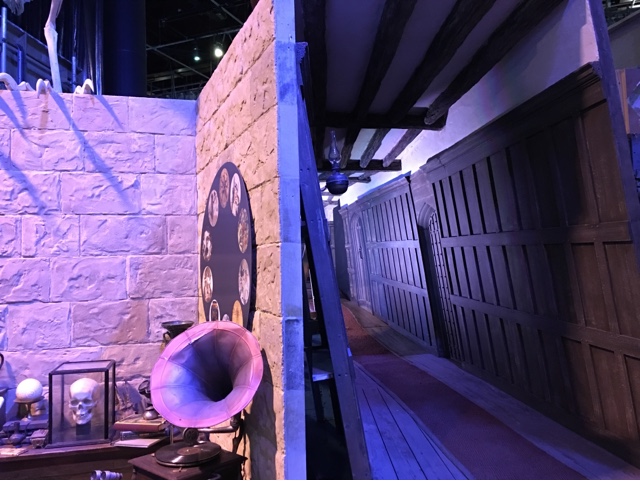 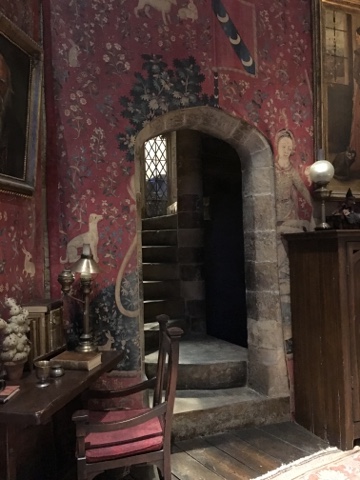 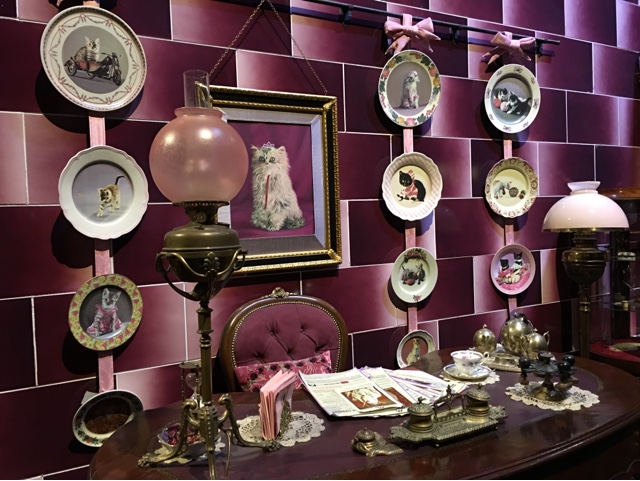 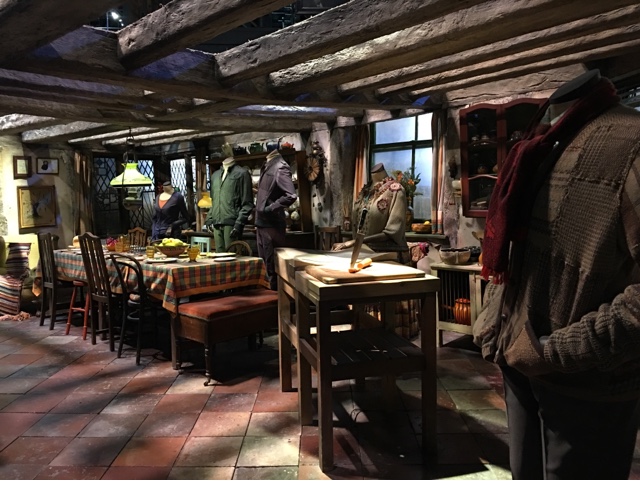 Wands that magically destroy any pile of cash. Ouch.... 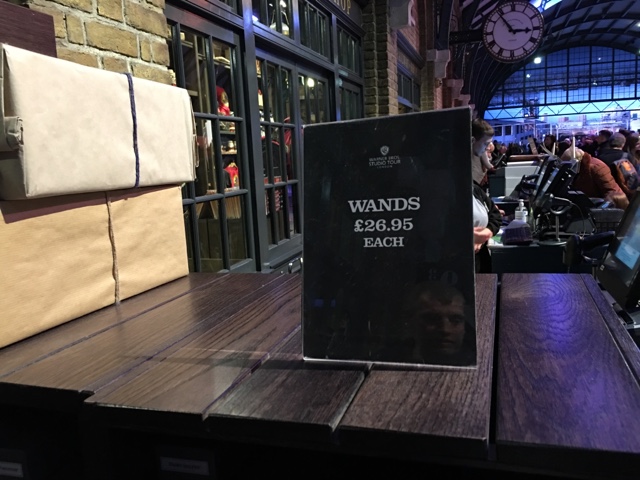 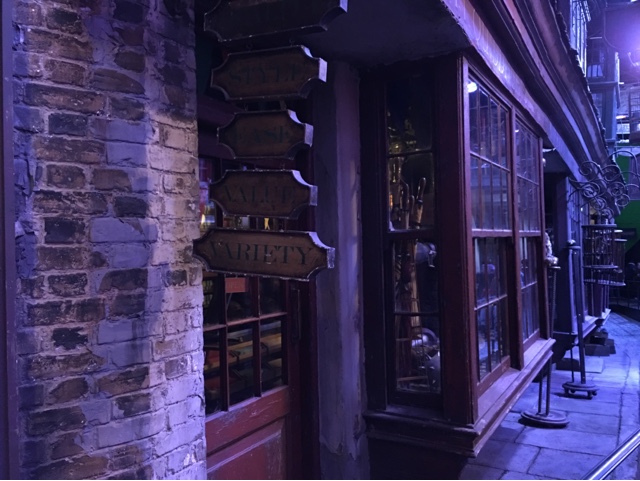 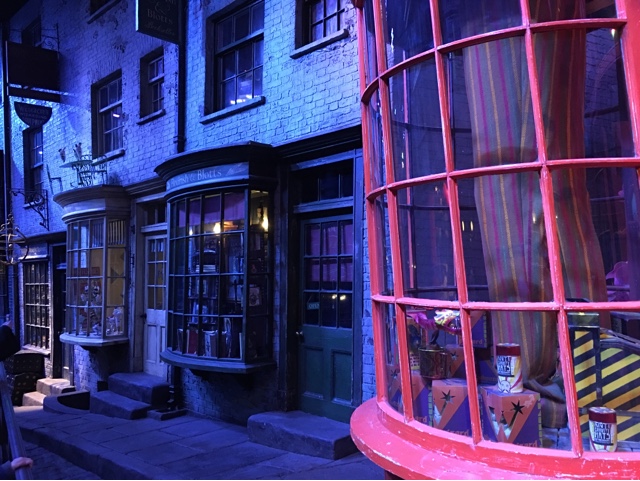 Emma had an absolute ball doing this, she loved every second of it. 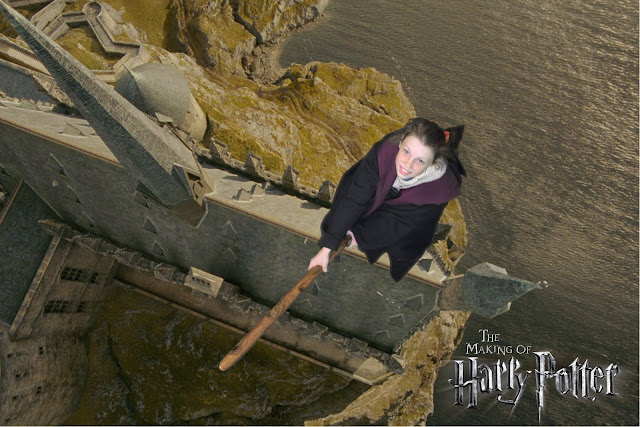 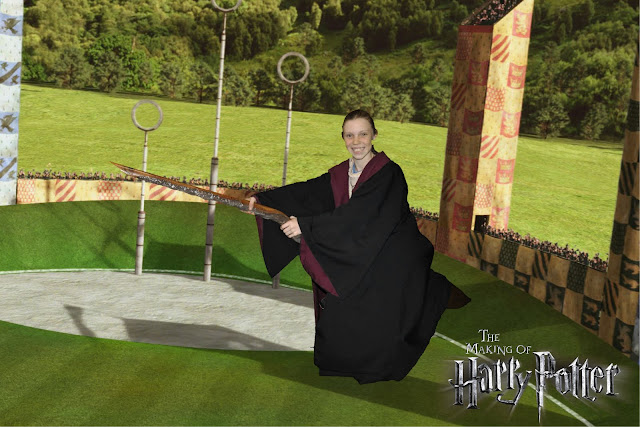 A small part of the shop on exit 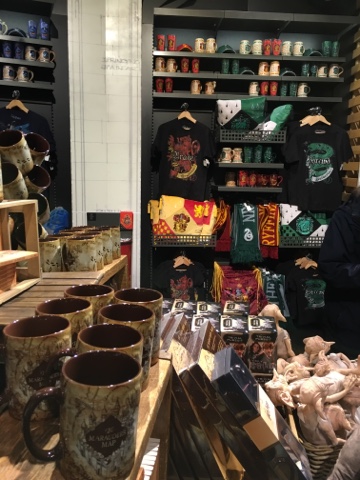 Emma's chocolate frog, its massive (and should be at £8 !) 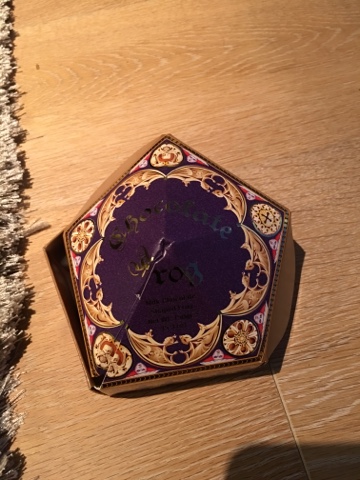 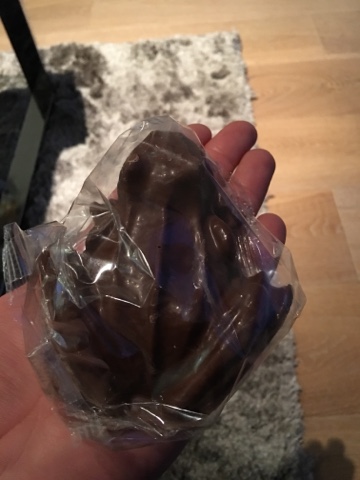