Pompeii is a place I've always wanted to visit since first learning about it sometime in primary school, so I was really excited about today.

A tiny bit of the history : Pompeii, along with Herculaneum was destroyed and buried under 4 to 6m  of volcanic ash and pumice in the eruption of Mount Vesuvius in AD 79. The eruption destroyed the city, killing its inhabitants and burying it under tons of ash. Apparently they had had some warnings, so many people left before it was completely buried, but some people stayed behind and were killed.

After thick layers of ash covered the two towns, they were abandoned and eventually their names and locations were forgotten. The first time any part of them was unearthed was in 1599, when the digging of an underground channel to divert the river Sarno ran into ancient walls covered with paintings and inscriptions
You can read heaps more here on wikipedia or here on the Pompeii travel wiki.

Back to now, for us It was a super early start today, our train was due to leave Roma at 7.35, so I wanted to be out the door by 6.30 just to ensure we had plenty of time. I actually woke up before 5, so got up anyway and started getting ready.

We actually got pretty much as expected and were greeted with a fantastic clear sky. Looks like who ever turns the rain on at Easter excludes Italy from the schedule.

Walked down Spanga station, and for a few moments thought we were stuck in the elevator as it make a strange noise, the buzzer went off and it stopped. Luckily a few seconds later the lift started again.

Before entering the platform we grabbed a few bites to eat and some coffee (they actually had takeaway cups here). Again the coffee was excellent. Interestingly enough the takeaway cups are tiny, about half the size of a regular/small one at home. Sharon ordered me a latte, but I some how ended up with just a shot of espresso. Still excellent though.

To get on the platform, we went through the security ticket check with minimum fuss, they didn't even X-ray out bags. We were in car 11 so it was a bit of a long walk to our seats. Got in, found our seats and a few minutes later we were off, departing smack on time at 7.35 Trenitilia must still be haunted by the ghost of Mussolini.....

Not long after departing we were moving through amazing green rolling countryside at 290km an hour. These fields have been farmed for thousands of years, lots of volcanic soil. No wonder the food here is just astounding.

Got to Naples, transferring from the high speed train to the local one wasn't easy, and it wasn't well signposted. Eventually found our way. We had to go downstairs, turn left then find the Naples-Sorrento line of the Circumvesuviana train company. Bought train tickets for the Pompei Scavi station and headed down to the platform.

This is when disaster struck, there was a massive crowd surge to get on, and in the push I was protecting Emma, my phone, bag and wallet, but that even that wasn't enough, I felt something brush past my pocket and sure enough when I checked a few seconds later on the train with the door shut, my wallet was gone. Thankfully Emma was ok, and my phone wasn't taken.

A word about the Circumvesuviana train line. Its no wonder pick pockets frequent it, it dark, totally crowed and everyone pushes on and off. The trains and stations are disgusting, they look like something out of "Welcome Back Kotter" episode with all the graffiti everywhere.  If I was ever going to Pompeii again, I'd get the high speed train to Naples (which are just beautiful, clean and efficient) then join an organised bus tour to get to the ruins.

When we arrived at Pompeii, I spent the next 40 minutes calling Westpac, American Express and CashPassport cancelling all my cards. Thankfully I had one Westpac currency card back at the apartment, and Sharon had my other CashPassport card (I traveled with a backup cashcard with just a few hundred Euros loaded on it, just in case this occurred) so we still had access to some cash. Just kicking myself I had my two credit cards on me at the same time. Luckily I'd taken out my medicare card, corporate credit card and private health card before we left Australia.

I'll post a second entry on my thoughts about the operation of Pompeii and its transport / security issues later.

Once that was sorted with all the credit cards, we headed into Pompeii Ruins. Having prepaid printed tickets was a godsend in this case, we walked past a massive queue and just went straight through the turnstiles. Also found a cash machine to withdraw a little bit of cash for the day. I was planning to buy a new wallet here in Italy anyway, thats just got a bit higher priority now.

Wow wow wow. After entering the turnstiles, you walk up a steep Roman road into the centre of old Pompeii. The ruins are just totally amazing, some of the things there are just like they were left yesterday, and the quality and engineering is amazing. I'm just fascinated by their water engineering. They had sewers, fresh running water and storm water drainage all completely figured out.

We were lucky we had a virtually perfect day, clear blue sky, warm (but not hot) and a gentle cool breeze to explore around in.

The buildings, especially the bath houses and luxury private residences were amazing. I'm still amazed they could do this with such a basic numerical system and a very limited banking system to fund everything.

The mosaic floors are just incredible and must have taken forever to do, let alone design. The bath houses have central heating and you can see the raised floors and false walls where the heated air would flow. Unlike the Colosseum and the Forum there is still quite a bit of marble left , in its day it would have been truly opulent.

The roads served a dual purpose, drainage and transport. There are large stones in many places where the road could be crossed without stepping in muck.

We packed a lunch to take with us, there was food available for sale there. The Romans had drinking water on most street corners, and cleverly they have now installed taps into most of them so you can fill your water bottles with fresh cool water when needed.

We saw the classic Pompeii scene of people who were buried alive in ash. This is in the bottom corner of the park. We also scaled a small hill and from there you could see the original field and the level where the ground was before the farmer discovered the hidden city digging in his field.

We left about 4pm, and sure enough the train back was just as crowded. When we got into Naples I found a police station to report my stolen wallet, and joined a queue of people who had their wallets stolen, 2 of them lost them on the train we had just returned on. It would seem this is a pretty serious issue here and I'm sure if it happened this regularly at home there would be police or security on every single train.

After that we grabbed a quick bite to eat, and got back on the high speed train to Roma. This time we were in first class and had awesome leather seats, with food and drink service. 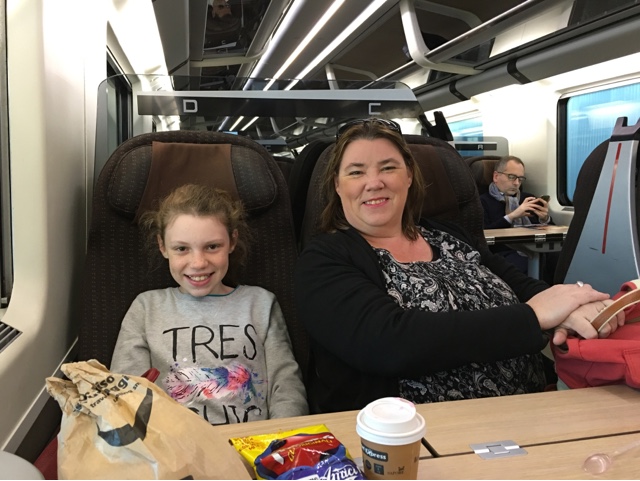 This train is fast... 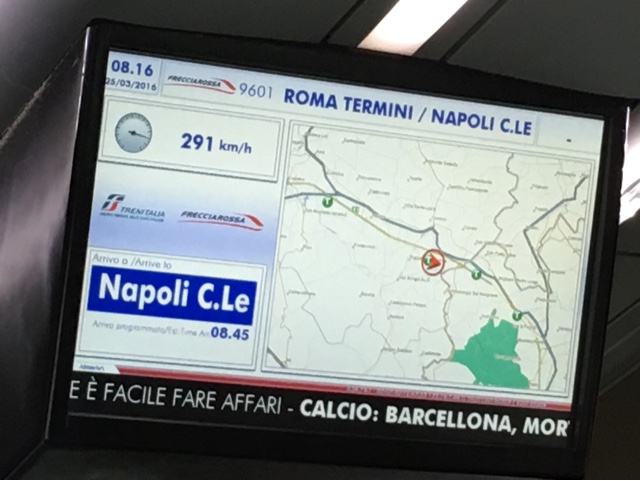 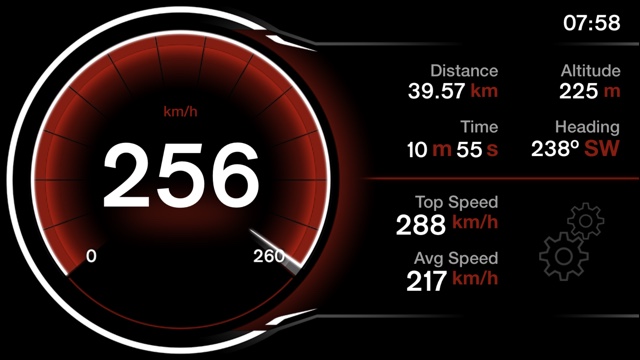 Some of the farmland we passed 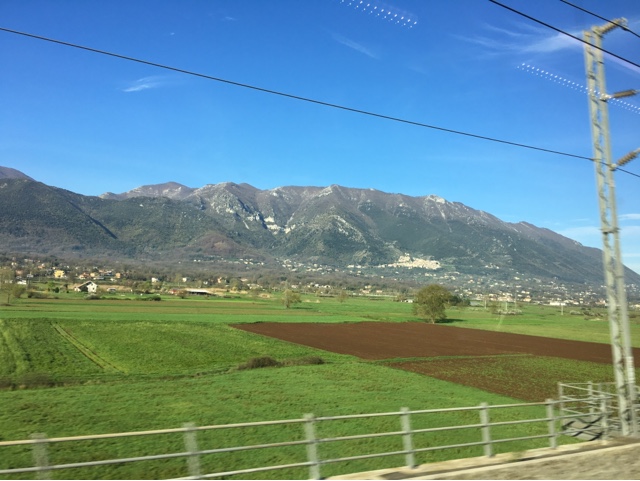 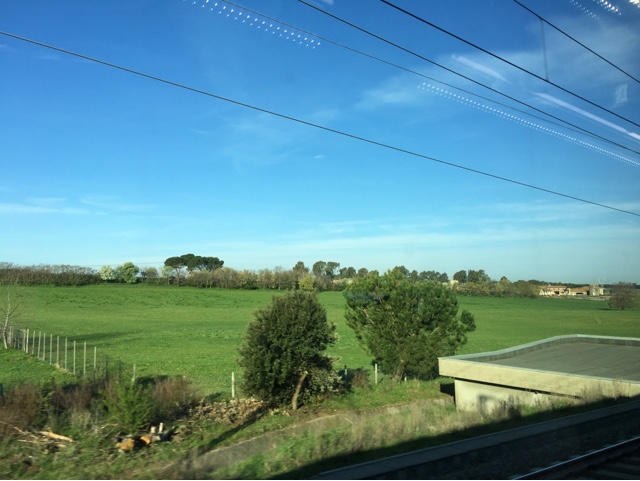 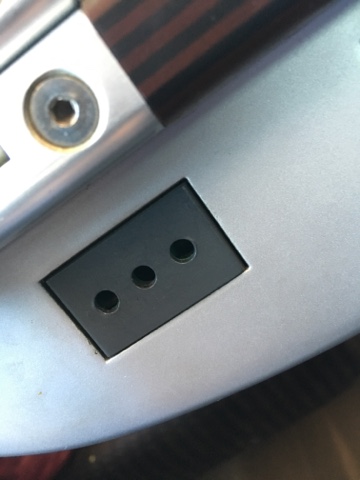 Our train to Naples 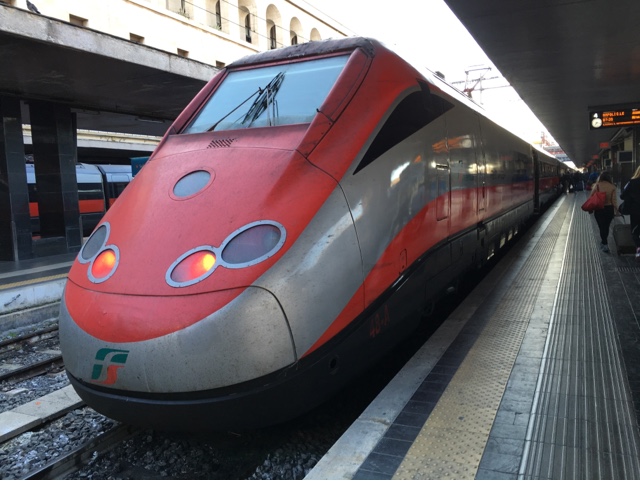 Return tickets for the 5 of us cost about $430. Excellent value considering the distance, the speed, the quality of the train and the fact we got 1st class on the return leg. 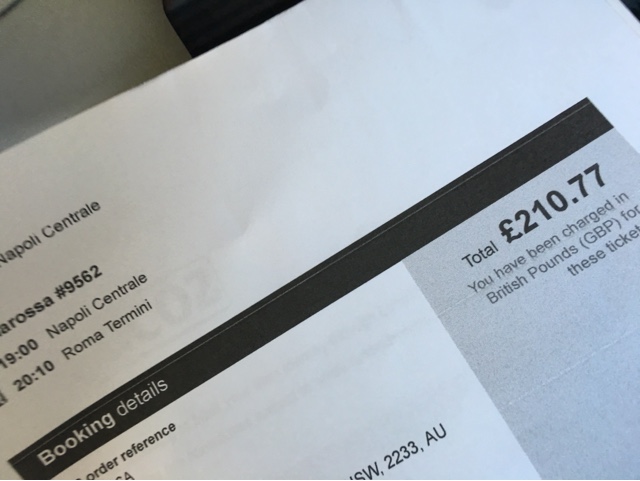 Just after we had entered the ruins 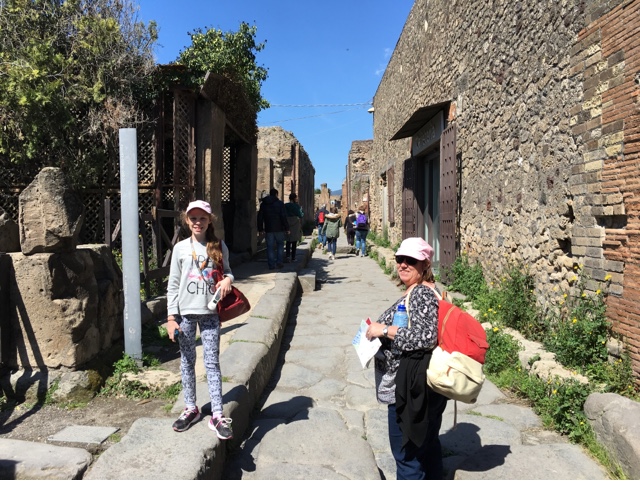 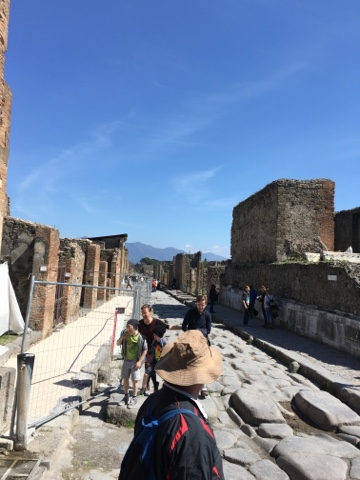 Garden in the grounds of a Bath house 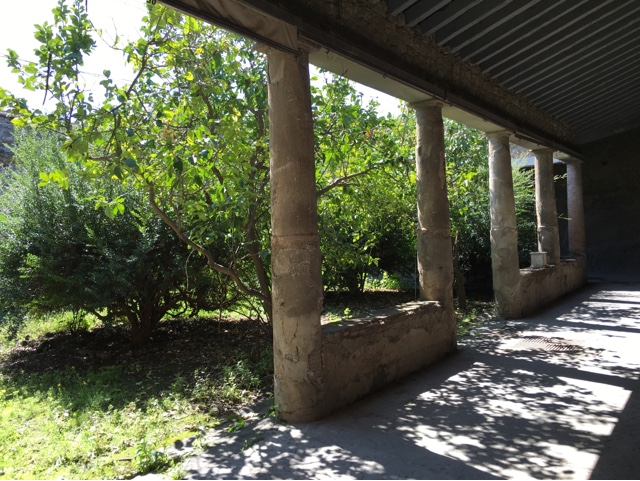 Marble basin in one of the bath houses. Just stunning. 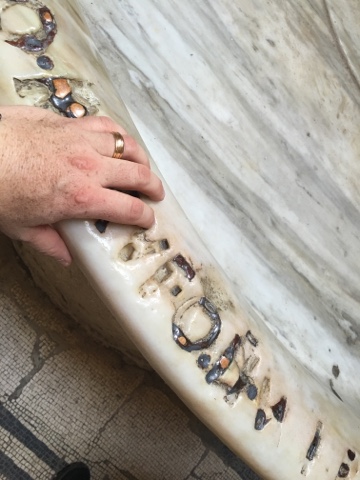 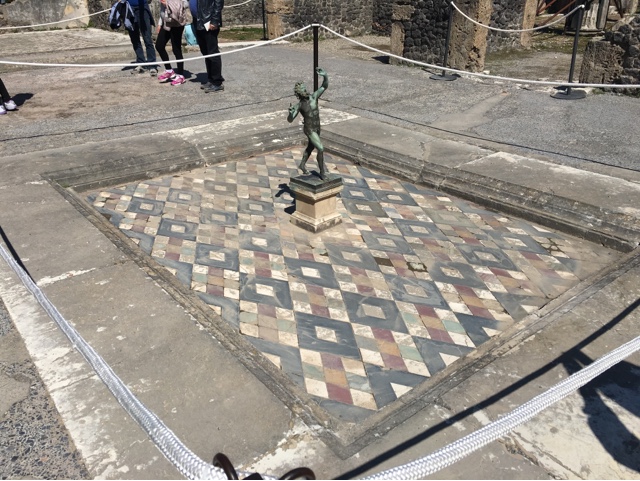 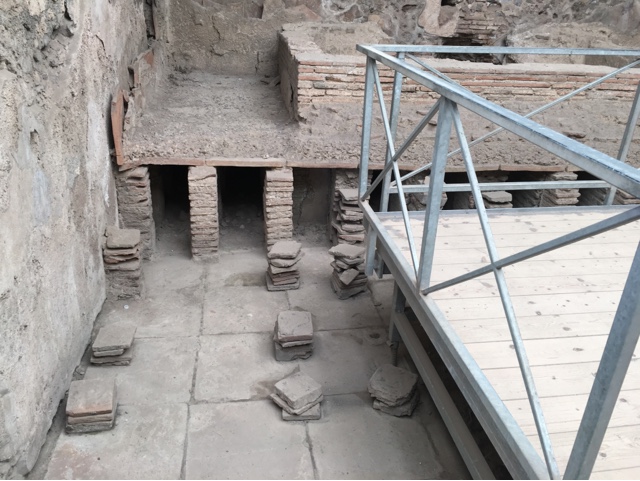 Amazing tiled floors. This pit is designed to collect rain water from a hole in the roof and channel it into an underground storage cistern for drinking water. 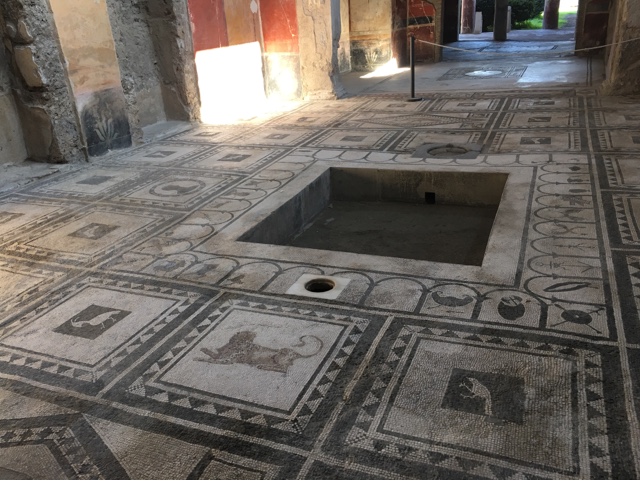 Room in luxury house owned by a relative of Nero 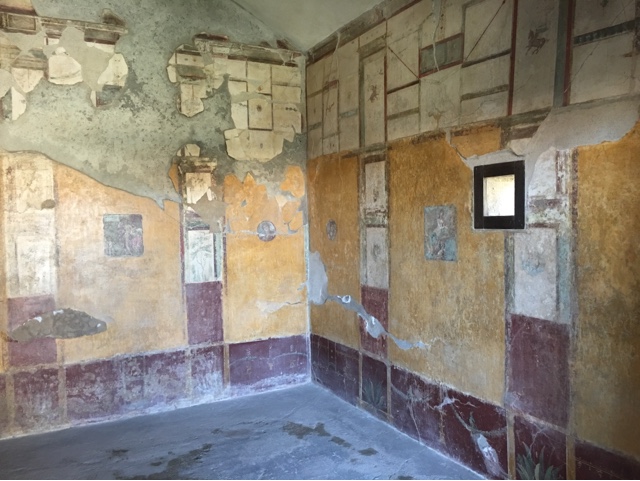 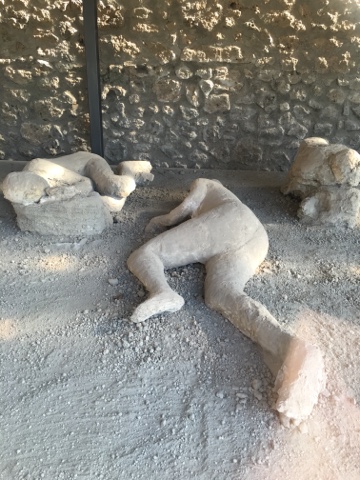 Emma had to do a cartwheel somewhere here..... 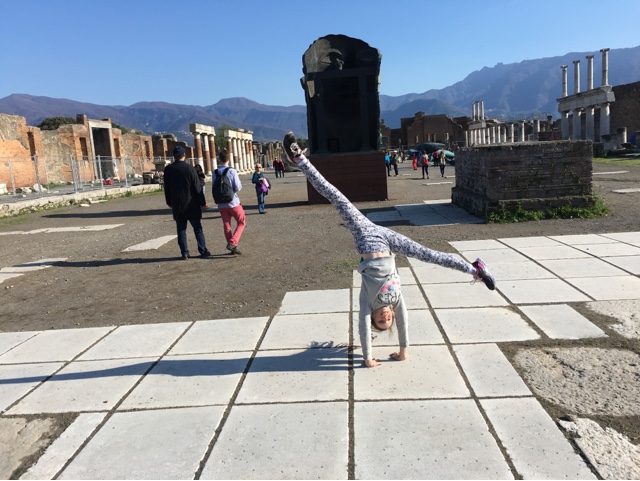 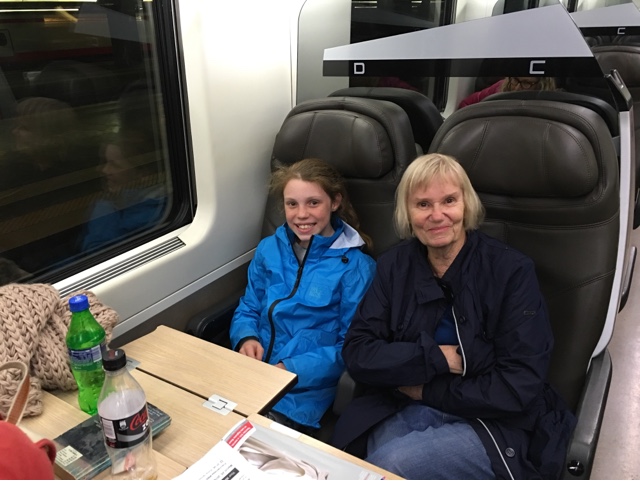