Thankfully we had a much better day today than yesterday. Paul and I were up and out of the apartment not long after 7.30 so we could get our bearings on exactly where are in Rome, grab some brekkie and head over to pick up the rest of the family.

We are staying on the Via degli Artisti, which is only a short walk from some of the major tourist attractions such as the Spanish Steps, the Pantheon and the Trevi fountain.

On the way we quickly checked out the Spanish steps (which are really closed for major renovations), had a quick look in the Trinità dei Montis, then hopped on the Metro at Spagna station to get of at the main terminus (Termini) which is close to where Sharon, Emma and Sue were staying.I was surprised at how grotty the metro is, the trains themselves were fine, but the actual subway really needs a good clean. Other than that, at 1.5 Euro, its pretty good value.

Paul and I grabbed breakfast at a little cafe on the Via Solferino, our first meal in Rome didn’t disappoint, i had a simple toasted ham and cheese sandwich with coffee, paul had an omelette and coffee. The girls had breakfast that the hotel they were in, as it was included in the price of the room.

Considering we walked in and booked that room after 9pm and included breakfast, the Amaifi Hotel was pretty good value for 90 euro. Its only a three star place, but I was surprised how good it actually was (way better than three stars at home), i had a better look around when we were checking out, If I could have booked all 5 of us in for the week, I would have been happy with the place, but last night they only had one room that could fit 3. Its rated pretty highly both on trip advisor and booking.com   The girls rated the included breakfast as excellent.

Paul and I then checked out the main rail station, bought a sim card for his phone (I already had a UK one that works cheaply in Italy - Thanks John! - he picked it up for me when he was there last year) and headed over to the hotel where the girls were staying.

After checking out we squeezed all our luggage plus the five of us into a taxi to the apartment. We discovered a few things needed were missing, (cutlery and Kettle for example), but a quick text message to the apartment manager and everything was in the apartment when we got home later in the day. We did all the unpacking, I sorted all the phone SIM cards and then we headed out for a wander and some lunch

We had a couple of Pizzas at the Tridente Cafe for lunch. Just as expected, they were delicious and very reasonably priced at about 8-9 euro each.  Lunch https://www.facebook.com/pages/Tridente-Cafè-Via-Del-Tritone-170-Roma/166255656783588?pnref=story

After lunch we headed down to the Trevi Fountain. To be honest the pictures you see don’t really do it justice, its just amazing. Got some souvenir shopping done, visited the Piazza Colonna and then headed down to the Pantheon. This is probably the best surviving roman building in Rome, mainly because it was converted to a church not long after the fall of the Roman empire.

Here we also checked out a few traditional Italian food shops, had some Gelato, took copious amounts of pictures around the area and then walked over to the Piazza Novona (where chariots were once raced) for more pictures and shop looking.

Here are a few of my Random observations about Rome in my 24 hrs here :-

Wikipedia entires for some of the places we visited :-

A couple of pics from today :

Our New Apartment
(On the ground floor which is great) 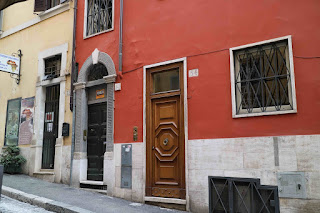 Gelato in front of the Pantheon 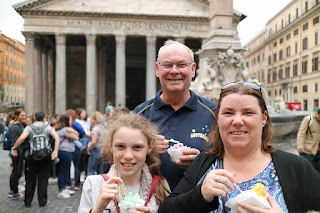 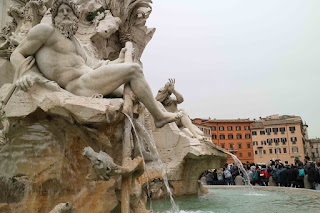 I've trained her well. Emma taking a pic of the roof in the Pantheon 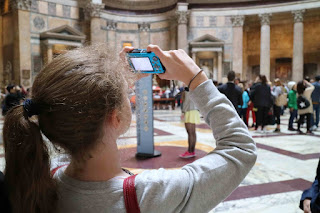 Coin toss into the Trevi 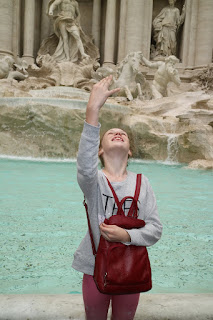