Today we leave Roma for Firenze (Florence). Our train (Frecciargento #9426) was due to leave at 12:50 and we had to check out at 10:00 so we had plenty of time to get to the station. Much to my relief, we were actually completely packed and ready just after 9:00, so we just relaxed in the apartment until our transfer van arrived. I was up early and had already had my morning coffee

Interesting note on the garbage here in this part of Roma, you just put it all in a bag, tie it up and leave it outside your door, and each morning a small truck comes along and takes it away. Would seem there is no recycling, unless they sort all that back at the depo. There is just no space here for the three bin system we now take for granted back home in Sydney.

Given the crap with my wallet in Naples, with the transfer to Termini (where the high speed train leaves from), I wasn't taking any chance with the metro and booked a van through Bob's Limo service to take us there directly. The driver turned up exactly on time at 10am with a spotless Mercedes van to take us to the station, spoke great English and was extremely friendly. When we got there he directed us to the entrance to the station. We didn't really go very far in distance terms, but this service was worth every single euro cent. Total cost was €55. If anyone wants a transfer whilst in Roma, I can highly recommend Bob. I just wish I'd booked one of his vans whilst in Naples :-)

Arriving at the station my scam-o-meter was operating at DEFCON-1 level. A porter greeted us, initially I was super supicious but he was dressed in a uniform and had what looked like a legit ID badge, so we let him take our bags (except the ones with cameras and passports) with him. The luggage storage area was closed, so he found us a cafe with an area to hold our luggage where we could wait for 2 hours. I had my second and third coffee for the day here. The girls went and looked at the shops, however I wasn't moving from where we were so I could keep an eagles eye on our stuff.

Our porter returned at just after 12, took our bags, helped us through the security, got to the platform. The predicted platform for the train changes about 3 times so he kept moving from platform to platform with us. When the train finally arrived he was able to unlock the train carriage for us early and load us on a good 10 minutes before anyone else. This allowed us to get all the good luggage spots before anyone else arrived, this was awesome as the train was quite packed with what seems like every one going home after a long weekend in Roma. This porter service cost €27 for the 5 of us. Not exactly cheap but worth it for the ease at which we got stuff onto the train.

Probably a good day for travel since its raining. On the train right now as I write a draft of this post, with train speed steadily increasing past 200km/hr and the train is perfectly smooth, doesn't really feel like it's going much more than 70. In the last few minutes we just past 250km/h

It's a pity Australia can't pull our collective fingers out and get something like this at home. Planes go faster but you also have all the checkin checkout crap to deal with. With the train you can show up a minute before it departs, get on and go. There is no way we can travel 300km door to door in an hour like they can here in Europe. It's awesome.

For an Aussie, I'm still amazed at how green the country side is as it zooms past. a true luscious deep green absolutely everywhere. Soon enough we had arrived in Florence and there was the mad scramble to offload all the luggage. Looking for the taxi rank, the scam-o-meter went into overdrive when a gypsy looking woman approached us asked if we wanted a taxi. Thinking she was going to want us to get in some dodgy van rather than the official taxi, on the way out the door I just joined the normal taxi rank and it turned out that's where she wanted us to go anyway and wanted payment for the direction!. I gave her a euro, of course she complained that wasn't enough. One euro for 15 seconds work is a pretty good rate in my book.

We got two official taxis to the apartment check in point, our taxi cost €12, Paul's cost €15 and they followed each other, bizarre. On the streets there are just swarms of people everywhere, all related to the Easter holidays.

Check in was easy, nothing like the apartment nightmare we had in Rome. The manager brought us to the apartment which is just fabulous, very Tuscan and compared to the one in Rome, massive. He showed us how everything in the apartment operates. This apartment also has a washer and dryer, so we are able to catch up on all our washing. Having to use google translate to operate a washing machine was probably the most humorous thing I've done today, Pictue me sitting in front of the machine with my phone keying in each word on the dial to work out what it does. (Sharon actually took a picture of me operating the dryer, see it below)

We are on the top floor of this building, which I'd say is at least 300 years old, however there is a small lift to bring all the luggage up in. The stairs are very very steep. Apartment has two bedrooms, a loft room that Emma has claimed, decent sized kitchen, two bathrooms and also has free wifi.

After a bit of break and starting the washing machines off, we headed out for a stroll, get some supplies from the supermarket and grab a bite to eat. The supermarket was larger than the local one we had in Rome, part of the french group carrefour. Most interesting find was wine by the glass in popper sized serves for 69 euro cents.

We both love Italian food, and have pasta or risotto at home once or twice a week. Having eaten Italian every night for a week now, we are starting to miss the Asian, Mexican and Indian food we also cook on a regular basis. We noticed how expensive some simple asian ingredients are here in the supermarket, and a kit to make Mexican was twice as expensive as at home. I think I'll be waiting until we land in London for a nice curry.

Dinner tonight was at a restaurant just down the road called Ristorante la Grotta Guella. Paul had a massive Bistecca alla Florentina  (Beef Steak). Sue and I both had a tuscan spaghetti ragu, Sharon had a mushroom and truffle pasta and Emma had yet another pizza.

Tomorrow we head off to the Uffizi Gallery


Our luggage at Termini 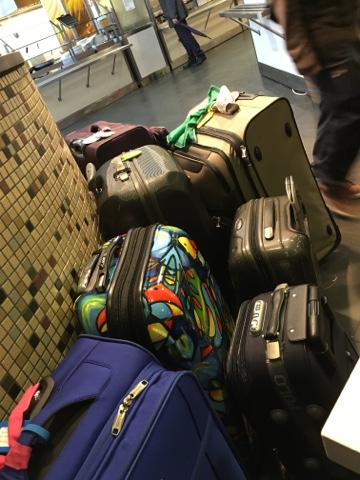 Our luggage poter at Rome. 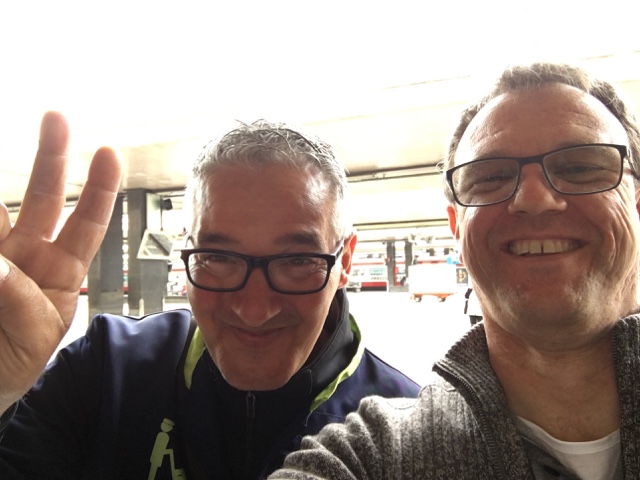 Our train to Florence 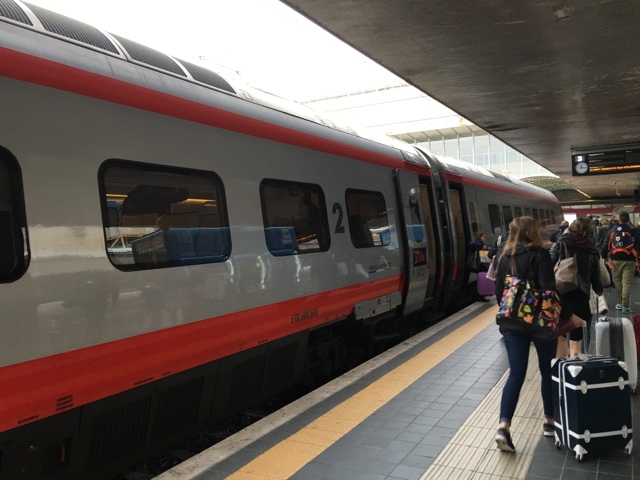 Train seats have power. No excuse not to keep blogging on the way. Although just gazing out at the Italian country side is taking a fair amount of my attention. 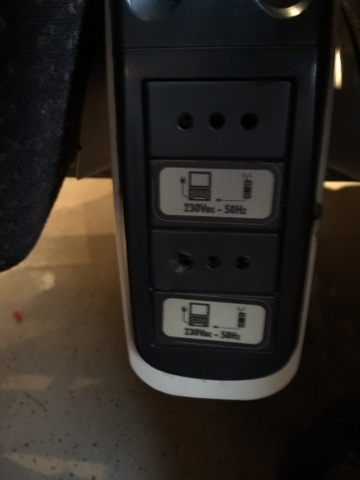 Passing over the main motorway heading north. We are going at least twice as fast as the traffic 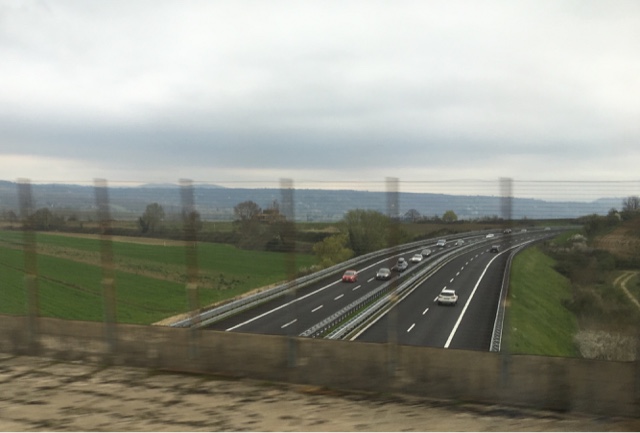 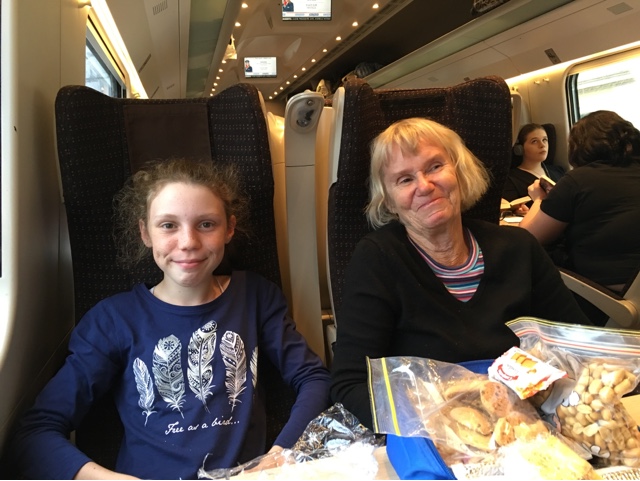 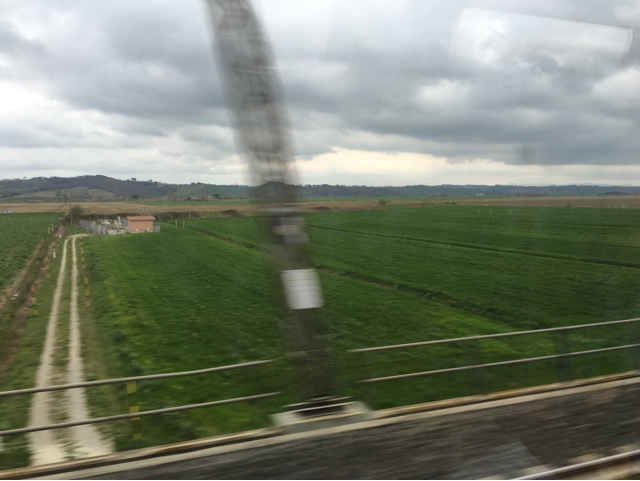 Zillions of people everywhere in Florence 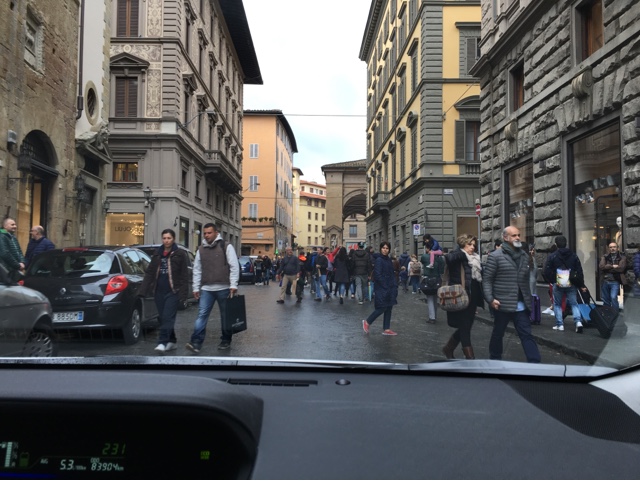 Living space in the apartment 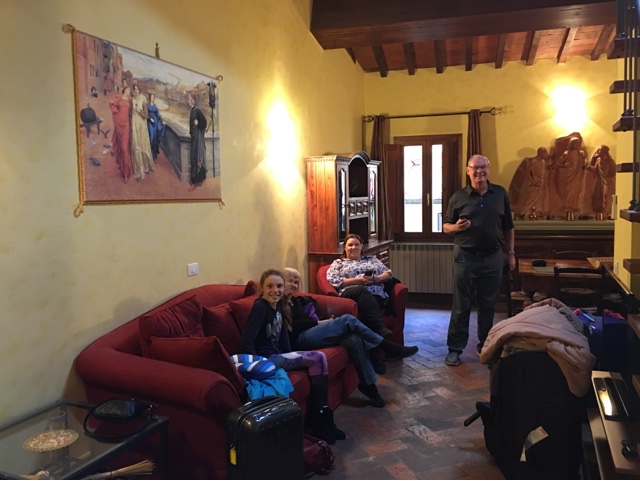 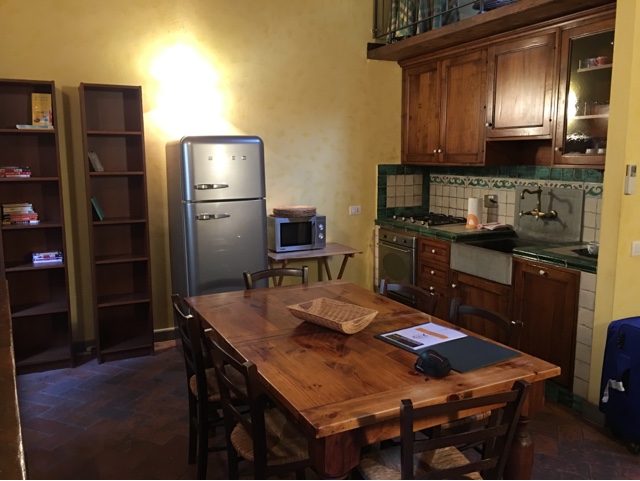 View from our bedroom window. 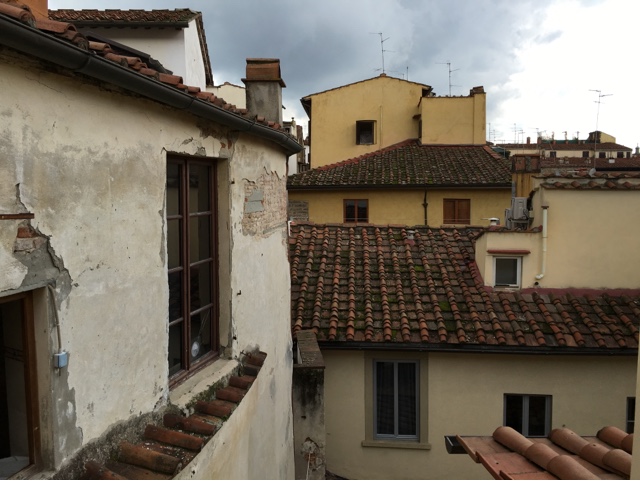 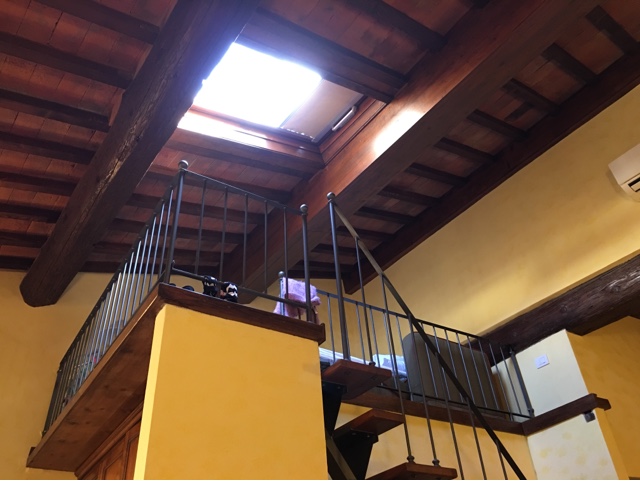 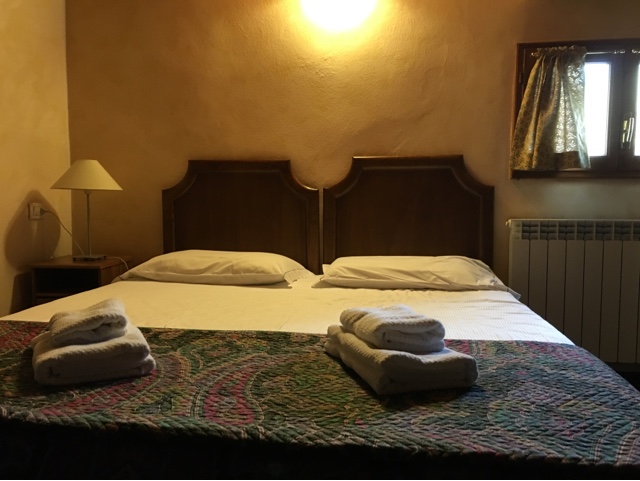 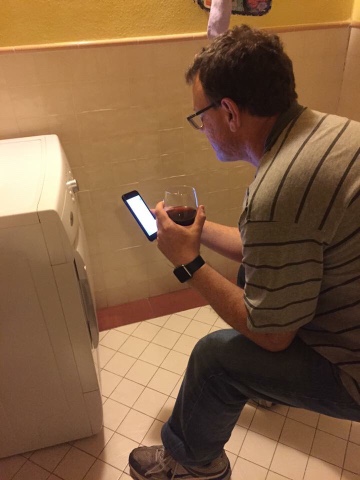 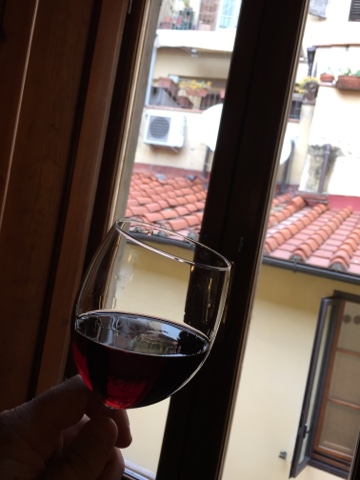 The narrow street our apartment is in. 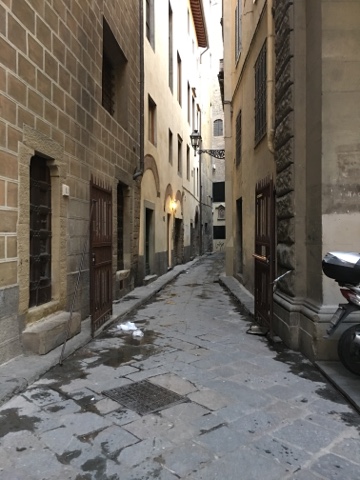 Wow, check out how expensive this is !! 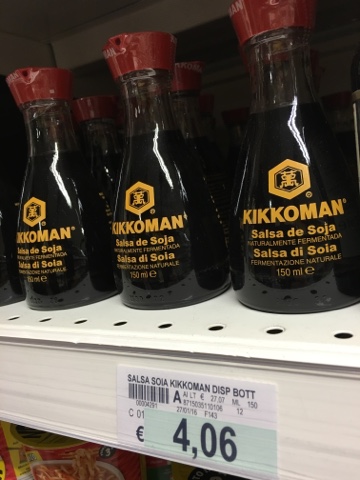 Wine in a popper by the glass. 69euro cents. Yes, we did buy some
to see what it is like. Haven't tried it yet.... 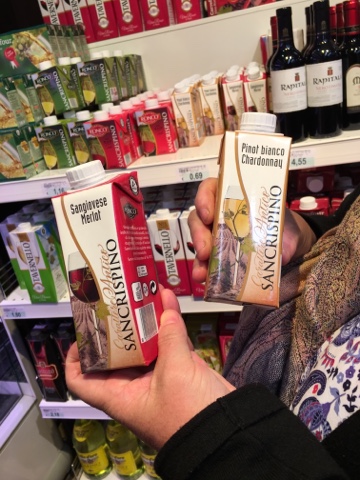 Mexican dinner kits are quite expensive in Italy 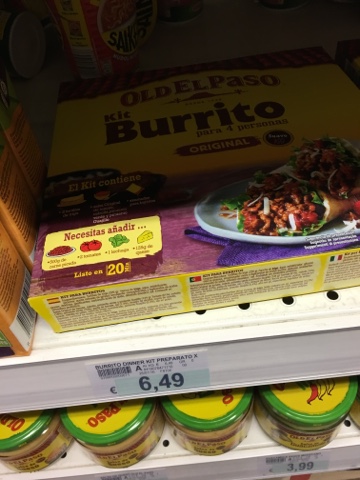 The restaurant where we had dinner 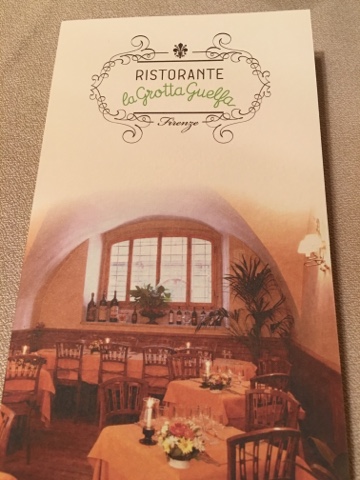 Yay, we are in Florence ! 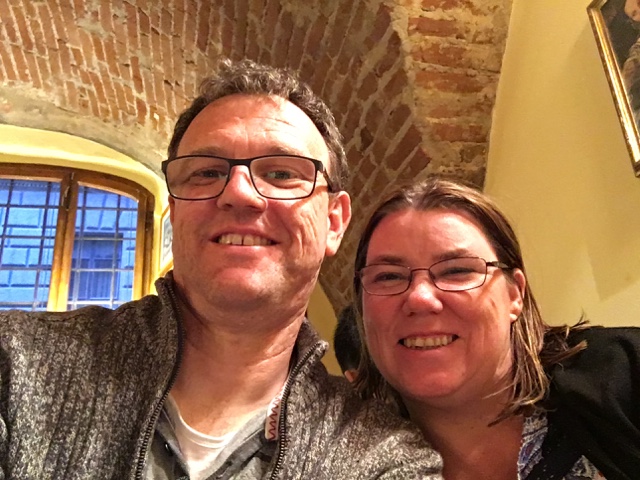 The atmosphere of the restaurant is awesome, and its just a few
meters down the road. 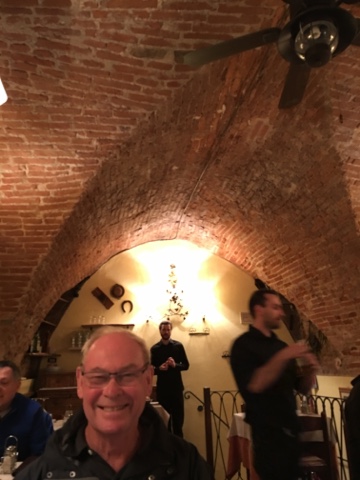 Emma having another margherita pizza. I should start a daily
pizza report! 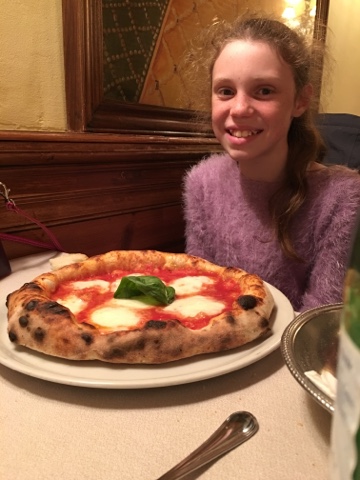 Sharon had a truffle and mushroom pasta. 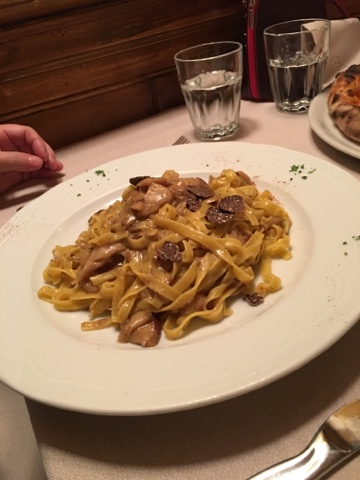 I had a tuscan version of spagbol. 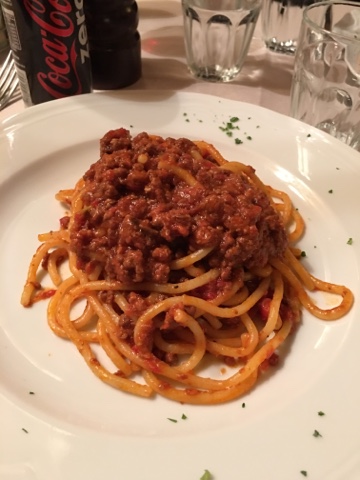