Today was much colder than yesterday, only about 13c, whereas yesterday was around the 20c mark, So we were quite rugged up today. (yesterday I was wandering around in t-shirt and shorts)

We started with breakfast in the apartment with the supplies we purchased last night, then headed out to see the Vatican Museum and Sistine Chapel. To get there we had a short stroll to Spagna station, then got off at Ottaviano station where it was a short stroll to the museum.

We didn't have to worry about directions from the station to the museum, every few metres outside of the station there were touts trying to sell "beat the queue" tickets to the museum, however once they realised we already had purchased tickets online (see my first or second blog entry for the links), they were really friendly and helpful in giving directions.

We arrived before 10am, so there weren't many in the general queue anyway, but after lunch when we were leaving, the queue was massive. Not long after entering we went through to the gardens and Emma did a cartwheel there as one of her Acrogym holiday projects

Even if you are not Catholic or religious, don't overlook the Vatican Museum, even if you have the slightest interest in Egyptian history, its worth a visit. They have so much stuff there its amazing. Even to the Ancient Romans, Egyptian History was ancient to them. The great pyramid was completed around 2560BC, which is approx. 2000 years before the start of the Roman Republic. Consider this, Julius Caesar lived closer to the invention of the internet than he did to the building of the Great Pyramid.

So both the Ancient Romans and the Romans during the dark ages were able to pillage stuff from Egypt and bring it back to Rome, were it ended up absorbed into various structures around the city and eventually ended up in the Vatican Museum. Its also amazing to think how much stuff the Egyptians left behind that there was enough for the Romans, the French, The Germans and the English to pillage over their various empires and still be some left for the Egyptians to display in Egypt.

There are statues everywhere in the Vatican Museum, and it doesn't take long to notice that a significant number of them have been vandalised over the course of history. In summary, Who nicked the dicks?


The museum also hosts some amazing tapestries, and I actually thought the map room was just as impressive as the Sistine Chapel itself. But for me, I personally thought all the mosaic tilled floors where some of the most incredible features, a lot of people walk around with their heads up when there is some amazing stuff right under their feet.

Just before entering the Sistine Chapel, we grabbed a few bites to eat, again I was surprised that we weren't being completely gouged with the price of food considering the captive audience they have.

The Sistine Chapel was crowded, just hundreds and hundreds of people all squeezed in, with security trying to move everyone along and also stop people taking videos or pictures, as well as telling every one to  be quiet.

For me the most amazing thing about the Sistine Chapel was the curtains on the walls, or more precisely the painting of the curtains on the wall, they are done so well that at first glance its an optical illusion and they truly look like curtains. Another thing about the whole place is that there is not a single wall that is one single plain colour, everything is a fresco of some sort.

Upon leaving we went down the spiral staircase which is amazing just on its own, then headed back to the apartment for a bit of down time and I was able to blog a few things I'd noticed over the last few days.

Another thing that dawned on me today, is that there is great coffee everywhere in Rome, but I haven't seen anyone carrying around a coffee in a takeway cup anywhere. Most people have their fix just standing at a bar in the caffe, then move on.

After leaving the Vatican we headed back to the apartment for a bit of rest time and some afternoon tea before we headed out for dinner. I caught up with a bit of blogging, I went a little crazy actually, so here are links to the earlier blog entries from today if you missed them :-

Around dusk we headed out to have a look at the Trevi fountain at night, pick up some stuff from the supermarket and then grab some dinner. Dinner was at Il Ristoro Dal Patriota, we had the most fantastic bruschetta.

Tomorrow we are off to see the Forum and the Colosseum.

Wikipedia entries for more reading if you are interested :- 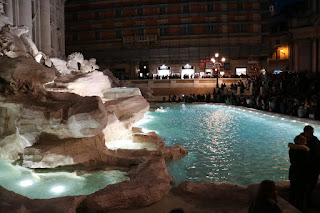 Wandering around the backstreets at dusk 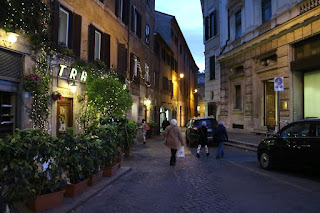 Spiral Staircase in the Vatican Museum 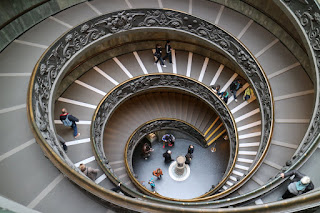 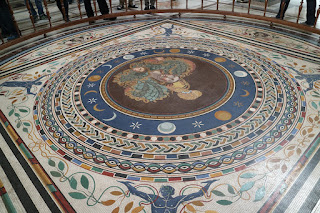 Another tiled floor in the Vatican 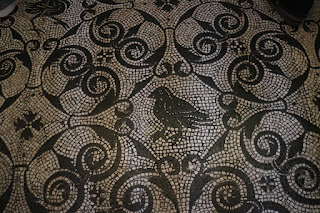 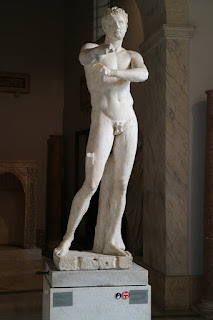 One of the many Egyptian artifacts 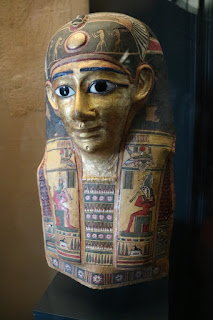 Emma doing a cartwheel at the Vatican 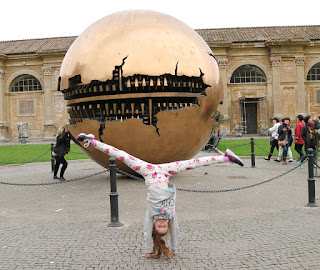 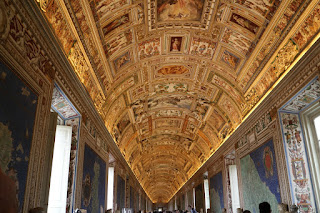 Some of the amazing ceilings 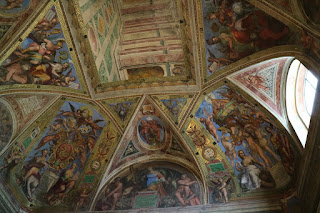