We spent the entire day looking over the Colosseum and the Forum. Unfortunately quite a large amount of this time was spent queuing, first to exchange our online voucher for an actual ticket, then in the queue to get into the Colosseum.

Online "jump the queue tickets" are great, except when everyone else does exactly the same thing....

We payed extra for a guided tour, which turned out to be pretty good, although we essentially ended up queuing a third time to use this service.

Once inside the structure, its astounding how large it is. Its an absolute engineering marvel. The forum is just as amazing, it covers a massive area, the books and things you read don't give much of an indication as to how large the place is. Its even more astounding when you realise the whole thing was once covered in marble and had a roof over the top of most of it.

During the dark and middle ages, both the Colosseum and Forum were essentially treated as a quarry, and most of the marble is now in the Vatican. Some of the Colosseum has had modern repairs, after it was quarried, this damaged some of its basic structure.  Some of it collapsed during earthquakes over the last few hundred years.

Between the Colosseum and Forum tours, there was a break of just over an hour which allowed us to grab some lunch, sampled yet another excellent Pizza.

When we finished the Forum tour we took the Metro back to the apartment, had a bit of chill time before heading out again to grab some snacks for tomorrow when we visit Pompeii. We also grabbed dinner whilst we were out. I had a fantastic risotto that was purple in colour.

Will be off to bed early tonight as we have a very early start to get a high speed train from Rome to Naples to visit Pompeii. 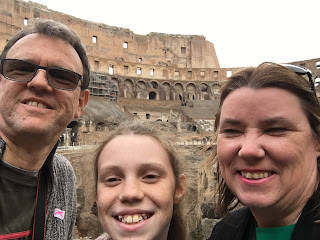 Easter eggs in the egg section 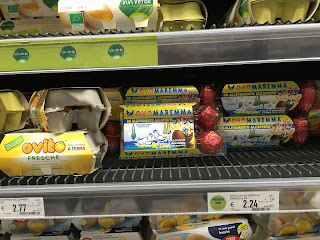 The colour of Fanta in Italy 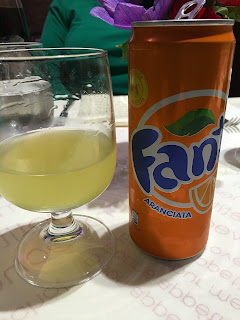 The delicious purple risotto I had 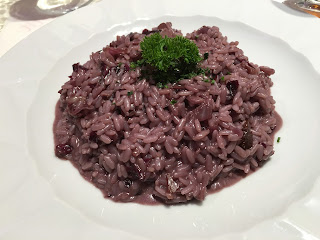