Well its our last morning in Paris, and still doing a bit of last minute packing, so I duck out to get my coffee. Don't really have time to enjoy one at the bar, and since its a travel / stress day, I know I'm going to be downing a couple of beverages over the day to keep my sanity, so I decide "fuck it" and just go for the pret-a-manger coffee once again (shame on me!), they had nice pastries anyway, and a good pastry can cover up a multitude of sins. As I did the other day, this post will cover the first half of the day since I'll be drinking coffee for most of the trip whilst we are either waiting for or travelling on the train.

Since they have the flat white option, for shits and giggles I decide to order one and see how it lives up to a proper flat white you would get in the land of Oz. For those that don't already know, its Australia's own addition to global coffee culture. I normally have cappuccino but do like flat whites from time to time.

I trot back to the apartment with my bag of goodies and coffees, get in, and suddenly my whole "shits and giggles" idea is giving me more of the shits and no giggles as its one of the worst flat whites I've ever seen. There is no frothy milk what so ever, so as soon as I take the lid off a portion of it spills on the floor, it turns out its just milk coffee. Oh well, thats a failed experiment. Don't ever order a flat white in Paris :-). Serves me right for going for the chain coffee option.

We are all packed up with plenty of time, the driver shows up on time, we load up and we are on the way to Gare du Nord station where the Eurostar starts/ends in Paris. Its not that far away and in 10 minutes we are there. And sure enough, I've not even got one leg out of the cab and I have another Gypsy beggar waving a dirty paper cup in my face wanting money. This has happened at almost every station or airport and I'm seriously pissed off this time, its got beyond being funny and I angrily shoo her away.

We make our way up to the Eurostar terminal and since the UK isn't in the Schengen area (and probably never will be) you need to go through passport/immigration and customs control, so at least the chances of being annoyed by Gypsies waiting for the train is pretty close to zero. Waiting for the train we buy a copy of Charlie Hebdo and get a coffee (machine made unfortunately, but better than the flat white I'd had earlier). So I can now say I've read Charlie whilst I'm in Paris. When I say "read" I really mean sat there plugging stuff into Google translate. Charlie Hebdo cartoons are both graphic and awesome, and I seriously consider learning French just so I can read the magazine. Its a real barometer on French culture, and when they were attacked by the Muslim terrorists, it really was a stab at the heart of the French. But they survived and if anything its had a Streisand effect and made the magazine even more popular here than ever before. If I were to learn French I could annoy them with just bad French rather than stuff I'm just parroting from Google translate. At least I made an effort.

We finish our coffees and starting queuing for the entry to the train, its quite a crowd, and not as easy as it is with the other trains where you basically just walk onto the platform and get onto the train, but the advantages is that you are not being hassled by Gypsies for money constantly and the pick pocket risk is a little reduced. Loading my bags onto the train, the handle on my bag finally gives way as I load it onto the train (I delayed getting a new bag, but will have to now). In no time at all we are in our seats, have left Paris and hurtling towards the english channel across the Somme. I can now tick Eurostar off my bucket list, its something I've always wanted to do. Its not bad, better seats than the TGV, but can't truly compare it, as I was in 1st class on the TGV. Not heaps of storage on the train, and it was crowded so we were lucky to be some of the first on and grab the prime luggage spots. Seats have power and there is free wifi, but its next to useless as it keeps dropping in and out as the train speeds across France. They do have an online info and entertainment you can access through your phone.

We ordered two sandwiches, two coffees and a packet of chips, not cheap, €21, about A$30. Ouch! The coffee was machine made, but on a speeding train thats acceptable. In less than three hours we had left France, and entered the UK. We can read the signs, the traffic is on the left where is should be and there is an air of familiarity about the place (and haven't seen any Gypsy beggars at all). Britain has even put on nice weather to welcome us.

The area of London we are in looks awesome, can't wait to look for coffee tomorrow morning ! 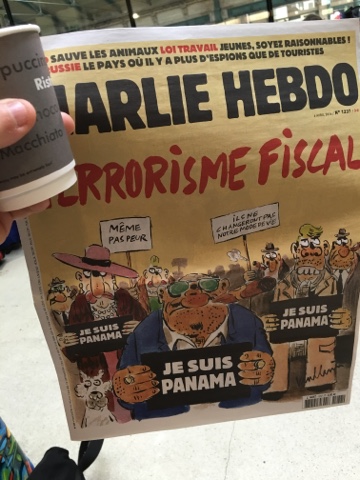 Close up of the Coffee at Gare du Nord 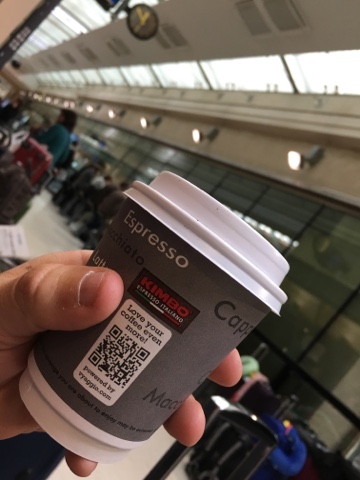 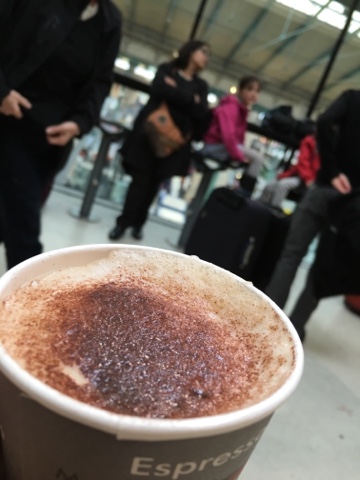 Looks like Charlie has realised the damage the coffee machine is doing to their culture, thats how I interpret it anyway. "A coffee machine, what next?" 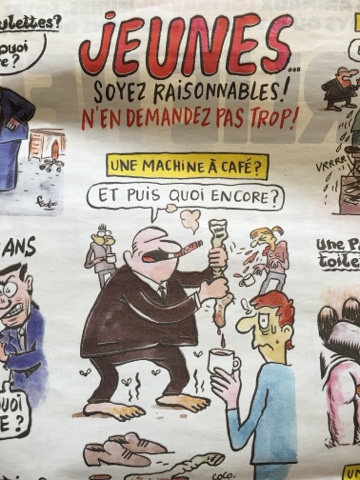 Takeaway from the morning, "Flat whites" in the small cups 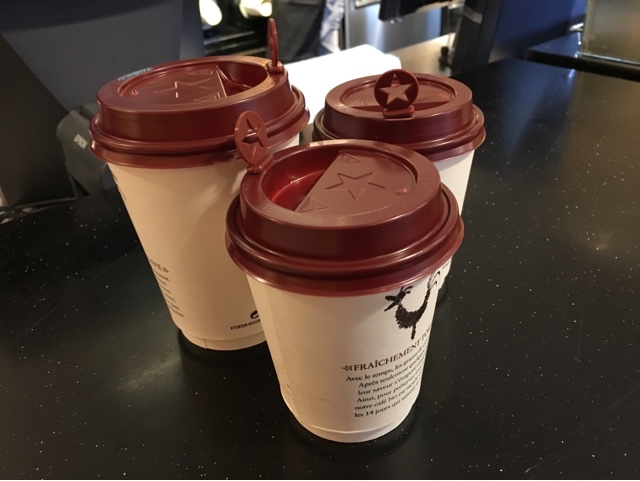 The almond croissants are awesome. 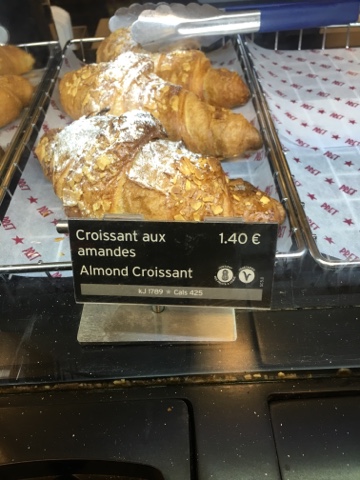 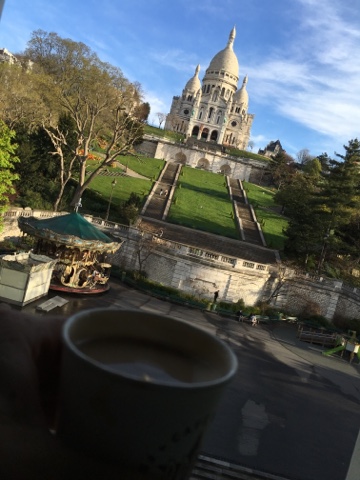 Have left France and entered the UK, but we are still in France :-) 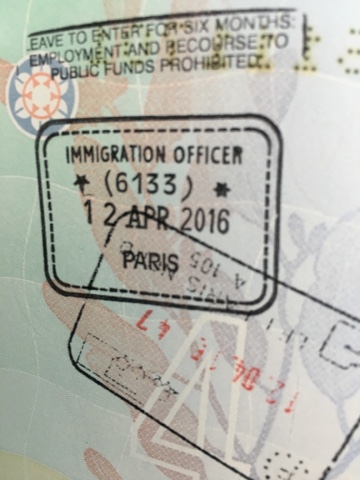 Why not, the French let American coffee invade and takeover. 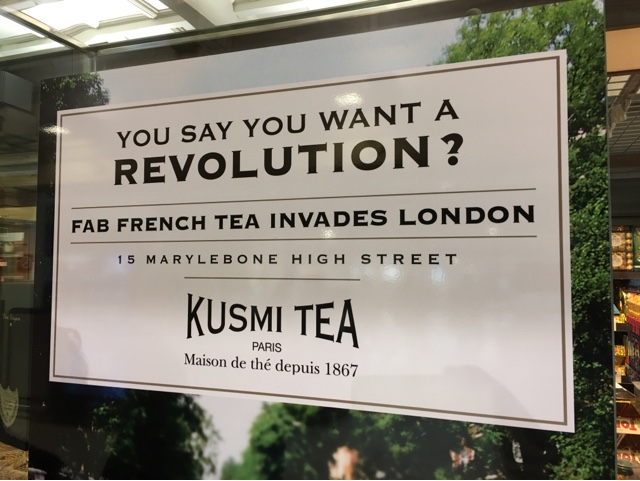 Our stuff waiting for the train 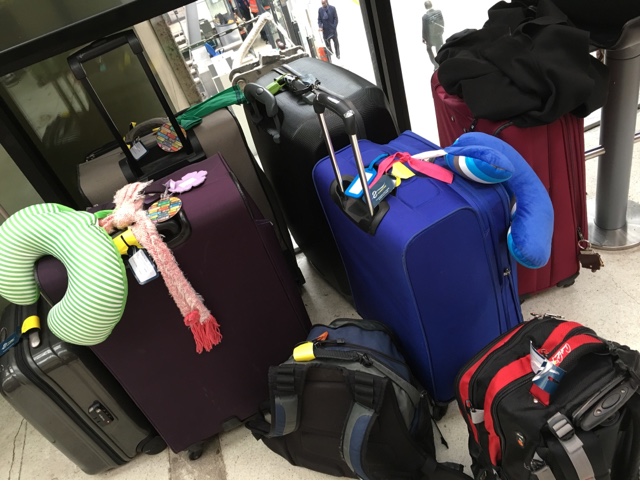 You don't see queues like this in the Eurostar marketing. 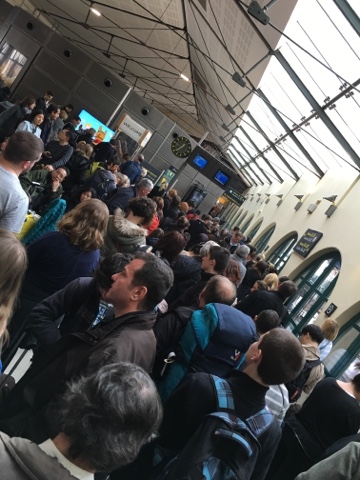 And we are on the train and on our way 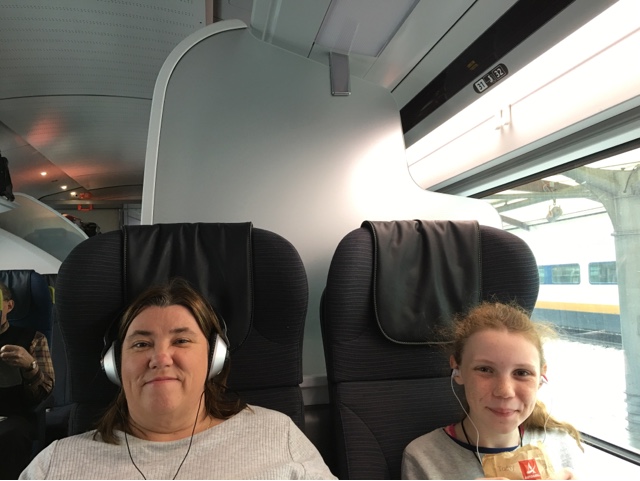 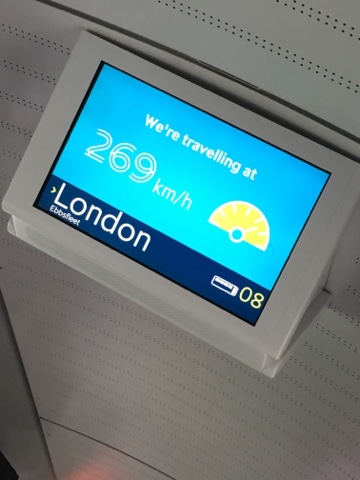 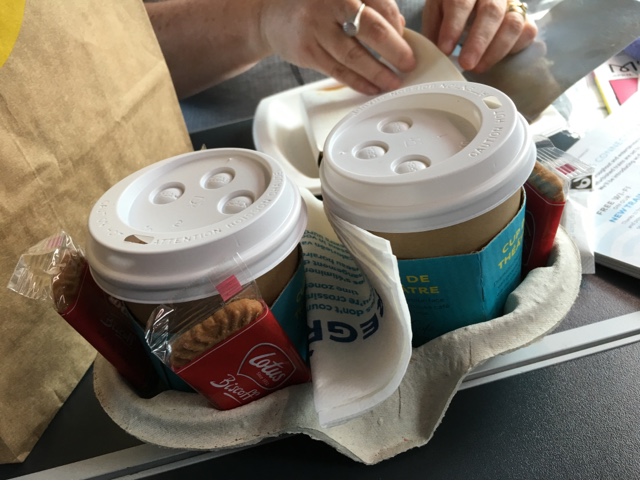 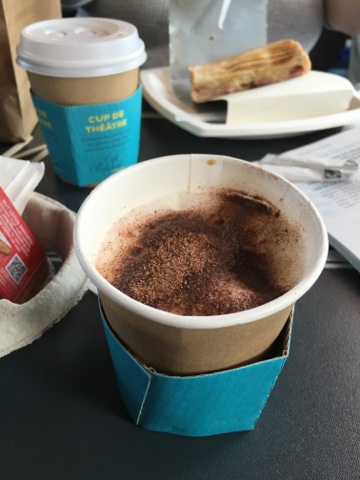 Train tracking website on your phone on the Eurostar 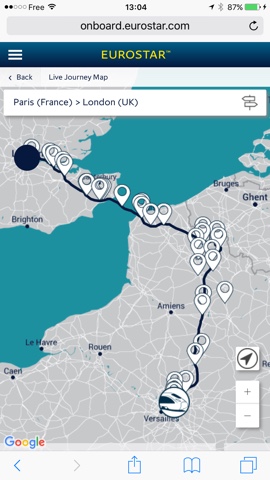 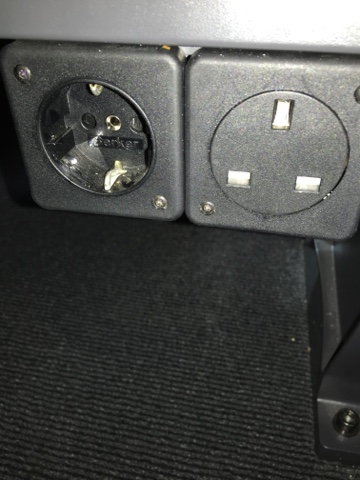 Speeding across France towards the Chunnel. 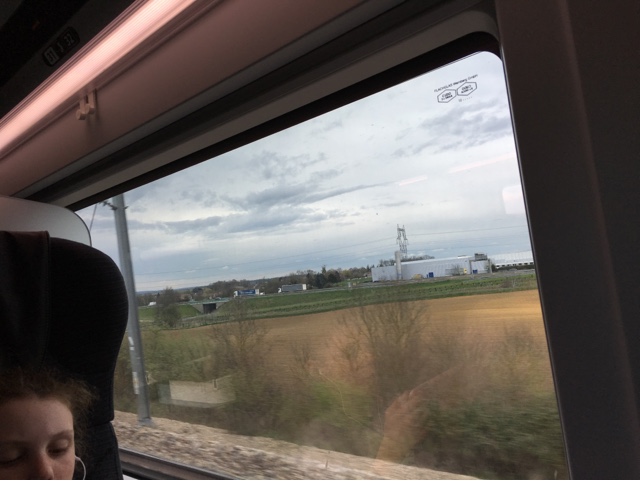 and we are "under the sea" 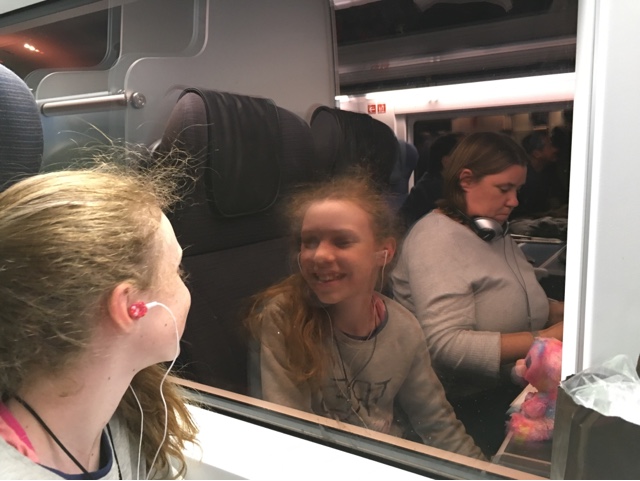 Magazine on the Eurostar. 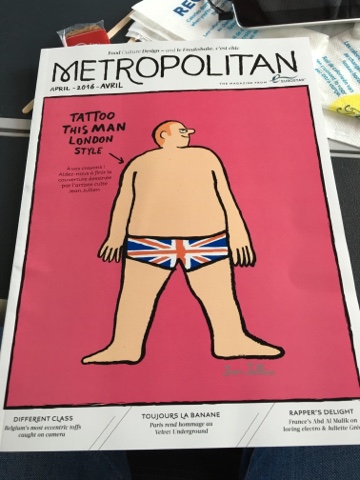 Just before the tunnel, lost of fences and barbed wire to keep illegal immigrants out. 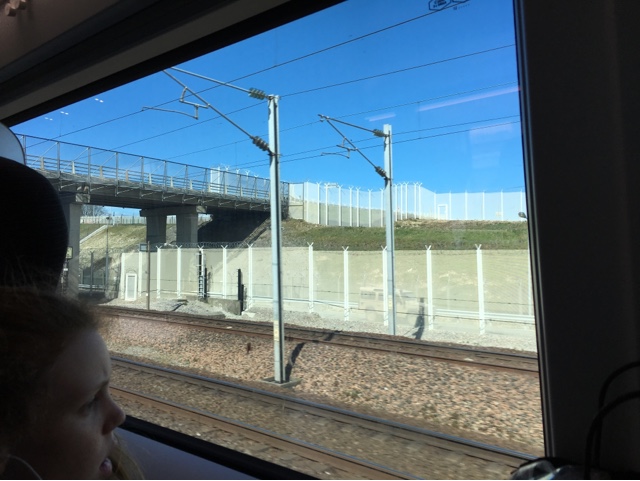 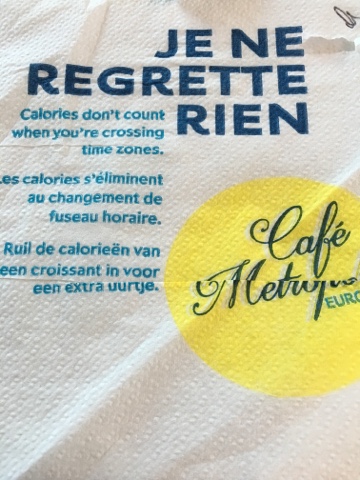 Bag handle is completely broken now. It has served us will to-date. 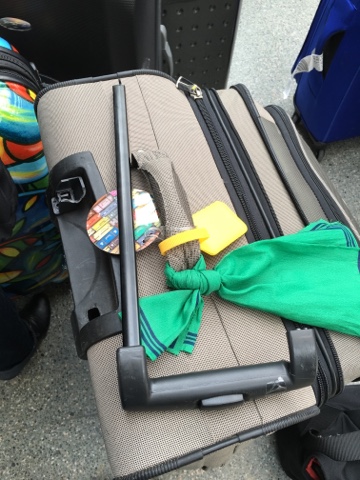