Update on our first night in Rome when we were homeless

Our original apartment in Rome was the Basilica S.Maria Maggiore View, also seen around the web as Alice's House Santa Maria Maggiore.

I'm writing this as both an update on what happened to us and a warning to anyone else who stumbles on this post from a search engine. This is a great looking apartment and gets good reviews on booking.com, but the exact apartment can't be found on trip advisor. Looking around in trip advisor however, it is in the same apartment block as "Alice's House" which gets shocking reviews in Trip Advisor, and after searching around booking.com, the following appears start appear on various pages, so it would appear the two apartments are somewhat related, possibly managed by the same group.

So in summary, this is what happened to us :-

The manager claims he told booking.com about the closure a few days earlier, but booking.com deny this. Personally I tend to believe booking.com in this instance, as the airport pickup Marco booked for us still showed up and took us to the original apartment. Marco showed an absolute zero duty of care to us in this instance. Even if he did tell booking.com, he should have told me via email or phone since he had all my details and I'd already communicated with him on multiple occasions. 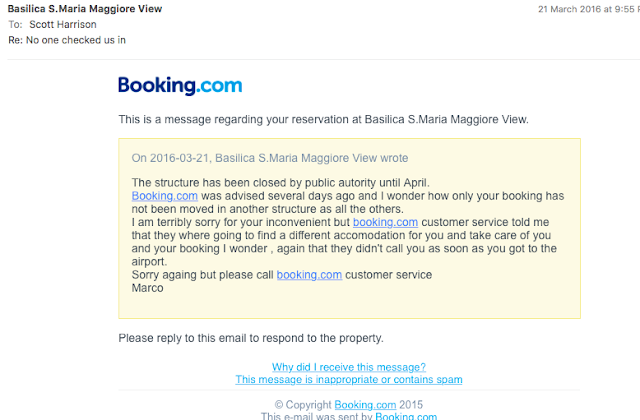 I guess the fact the owner wanted cash on check-in should have thrown up red flags immediately, but it had such a great rating on booking.com I over looked this. The manager says this was all an honest mistake and that he had informed booking.com, however they new nothing about it, and I would have thought he would have contacted me since I'd also had a transfer car arranged by him that still picked us up. It was also dodgy that he didn't answer any calls the night we arrived in Rome, yet responded to my email once I'd been settled into accomodation elsewhere.

So if you are looking at this apartment, book it at your own risk. As an alternative I'd suggest booking this apartment group instead. We got a far better apartment in a much nicer and quieter spot in Rome for the same price. (Click the link to see it)