Today is the day that I am leaving Venice on the journey to Paris, with the rest of the family leaving tomorrow, so I made sure I was all packed and ready to go. Train was at 15:20 so I wanted to be at the station absolutely no later than 14:30.  Even though the room was dark this morning I still woke up before 7 today. Years of waking at 5 or 5.30 is a super hard habit to break. At around 8 I headed out for my coffee.

The Rialto bridge is undergoing renovations, so it has a picture of itself on over the scaffolding. 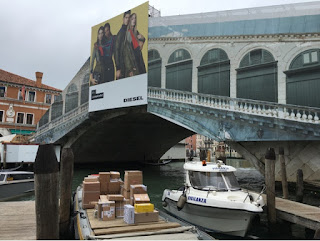 Our boat tickets on the Vaporetto from yesterday were valid till 11am so after breakfast we jumped on one to St Marks. Interesting place, people and pigeons everywhere and super expensive food and coffee. See my midday coffee report. I also thought the place was grubby, bird poop everywhere and the buildings need a really good clean. The entire square was also much larger than I expected and I earned my nerd spotters badge today, it looks like Olivetti have a small museum in the making on the square. Yet another technology company that didn't take advantage of their position at the time. 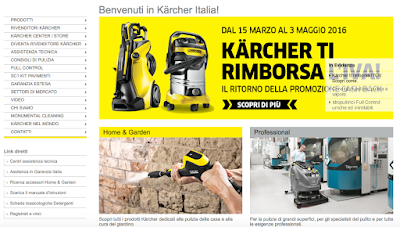 A Tip if you go to Venice, the boat is good for getting your luggage to the nearest hotel stop or the station, but for anything else it's an exercise in frustration. Slow as hell, crowded and cold. Just walk, the city isn't that large anyway. The ferry to Murano and Burano from yesterday are a necessity and are an exception to this rule.

Interesting observation about boat life and Venice, as you would expect everything happens by boat, but seems everyone ignores common safety, on the lagoon we passed stacks of small water craft, some with small children moving about at the front of the boat and not a single one wearing a life jacket. Maybe my view is coloured by Australia being a total nanny state, but I'd want kids of that age in life jackets.

We braved the Italian post office again and bought more stamps, which cleared up a mystery on why some stamps cost €2.50 and others €2.90. I pointed to the €2.50 version I already had, and the nice lady explained that wasn't a PosteItalia stamp, it was a private company and I couldn't put letters with those ones in a normal red post box. Maybe some of our post cards won't make it home after all. These private stamps are usually sold with the cards at the time.

We meandered back to the apartment around the small streets and poking into the shops, which in reality was way quicker than getting the boat back. We stopped by a pizza shop and got a few massive pizza slices for lunch for €2.50 each and had that back in the apartment.

Grabbed my bags and headed to the boat stop for the three stop trip to the station. Once there we discovered they have a baggage area where for €10 per bag you can leave it there and have it loaded onto the train for you. Even though I only had 40min to wait, I took advantage of this just so I didn't have to cart the big bag around. This will be a godsend for Sharon and the rest of the family tomorrow as they have to check out at 10am and the train doesn't leave till 19:20.

I'm currently on the "white arrow" train, the slower of Trenitilia's high speed services as it stops at more Stations long the way. This trip is about 4hrs and its "only" 450km to Turin, but we are still hurtling along at 200kph in sections. And of course way faster than any train in Australia.

This is the north of Italy, pretty flat with the alps to Switzerland and Austria on my right, and it's a mix of industrial sprawl kind of like anywhere else interspersed with farmland and apartment blocks. No where near as interesting as the trip across Tuscany between Rome and Venice. The train is a little more utilitarian than the other high speed services, but it's mostly empty and I'm currently congratulating myself on splurging the extra £5 to go in the first class carriage. In total its a great bargain at about AUD$40 for this train ride. I'm also amused that it's after 5pm and the English language announcements still start with "Good morning", but at least they are understandable. Sydney trains could learn a few tips here....

The train also has fantastic panoramic Windows to take in the whole view. Sure enough the conductor has just been through and yet again my loco2.com ticket has confused them totally, but just like before after 2 or 3 minutes they manage to work it out and leave me in peace. The issue is probably that's it's printed in English.

About 20 minutes out of Turin is starts raining really heavily, thankfully I had an umbrella handy. As they station is 100% undercover I didn't need it getting off and at Torino Porta Susa, and it had stopped raining as I exited the station. The hotel was even closer to the station than I realised, so from stepping off the train to walking into my room took less than 15 minutes. The hotel is actually fantastic, they gave me a room upgrade.

I've only been in Turin for a little, and I'm already liking the place. Wide boulevards in this section, trams, ride share bikes and no beggars or selfie stick sellers anywhere. On first impressions it feels a little bit like Melbourne around the Parliament station area.

Back in Venice the rest of the family went out to look at the lights on the Canal and grab some dinner at the restaurant we have eaten at for the past few nights.

Tomorrow I'm on the TGV to Paris, a train I've always wanted to try out.

Some pics from today.

Stuff from the Olivetti design museum. 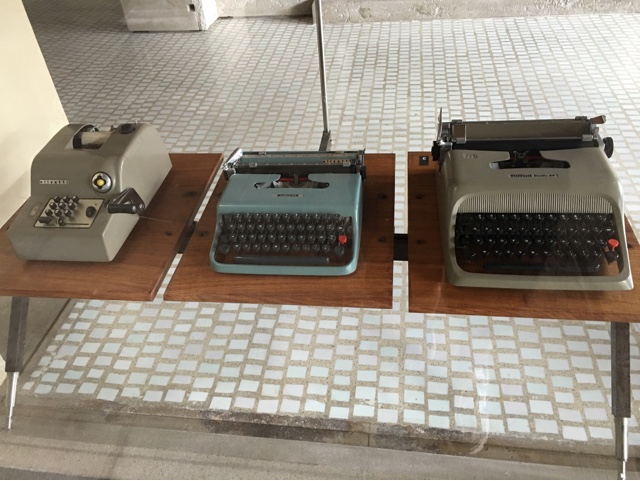 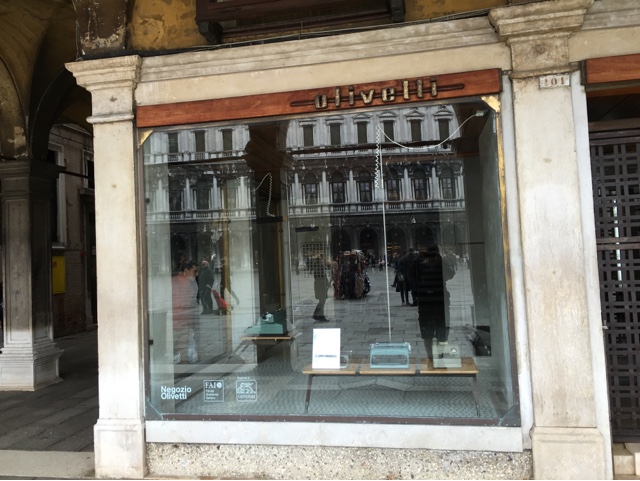 A carrot sharpener in one of the shops 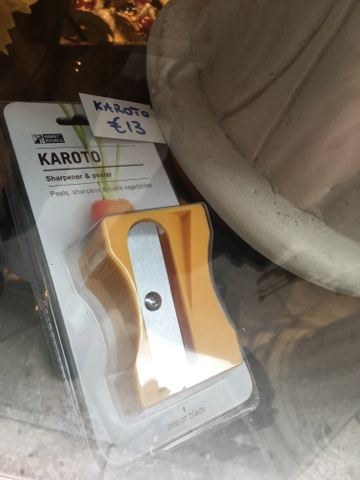 The hand was waving on the Sugar Queen. 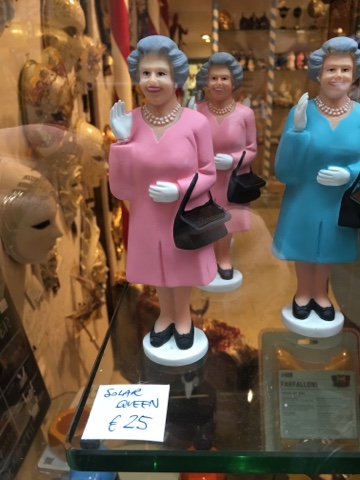 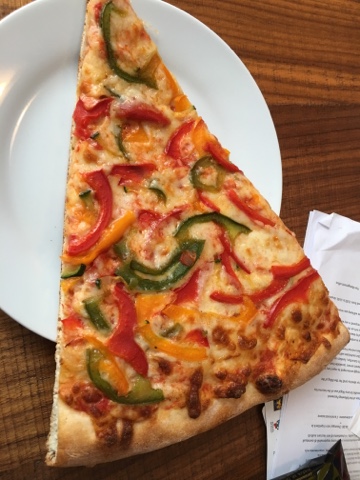 On the train leaving the Island and crossing the lagoon. 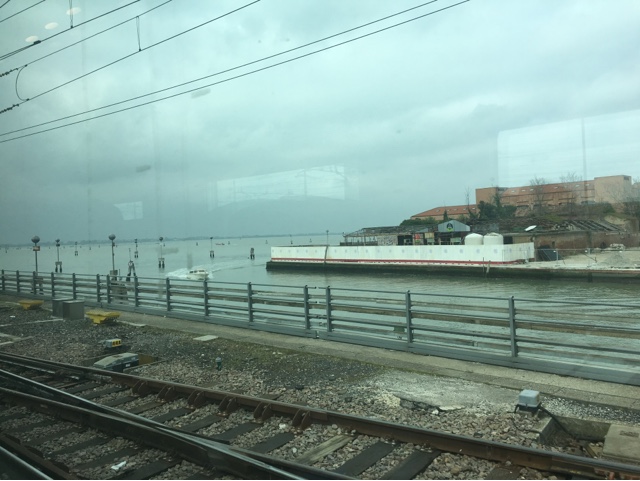 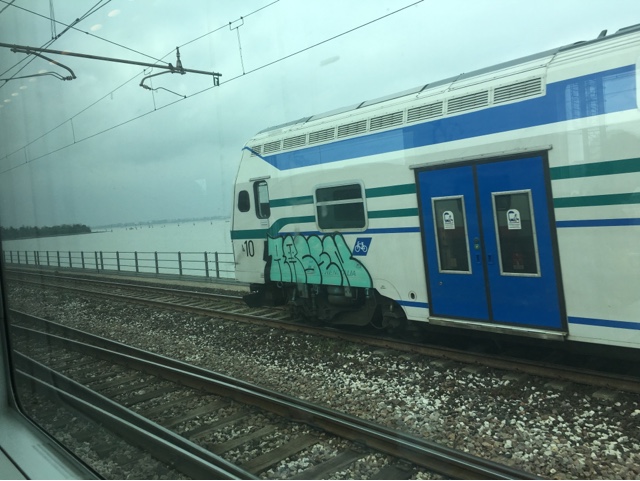 Train getting up some decent speed 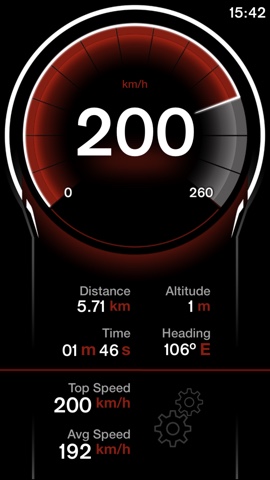 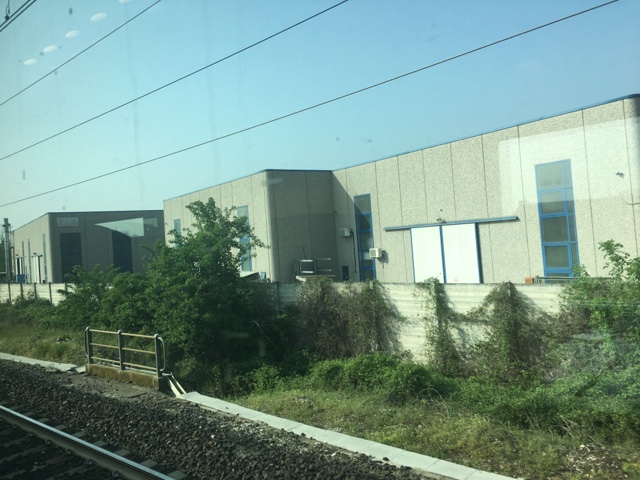 A bit of farmland. 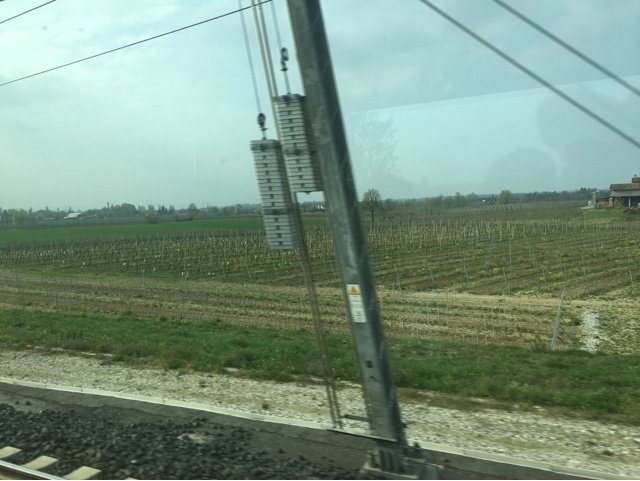 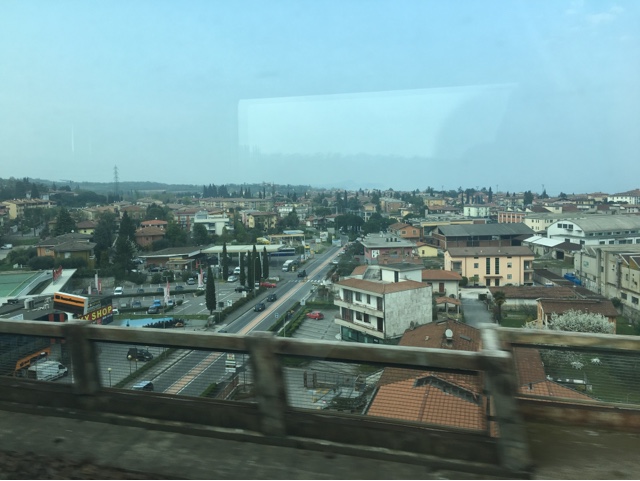 One of the 9 stops along the way 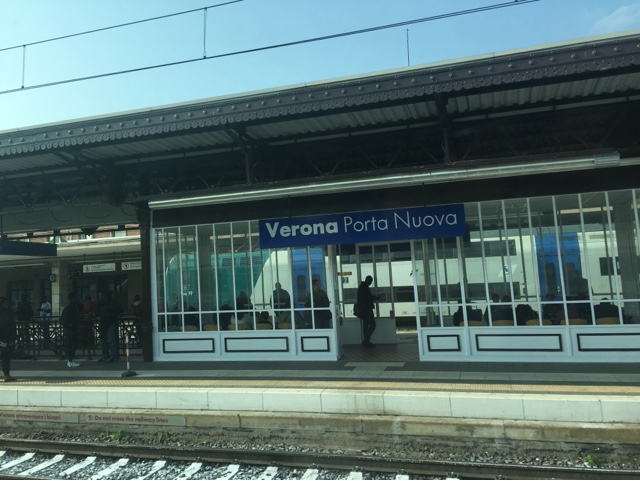 Just out of Turin the rain started 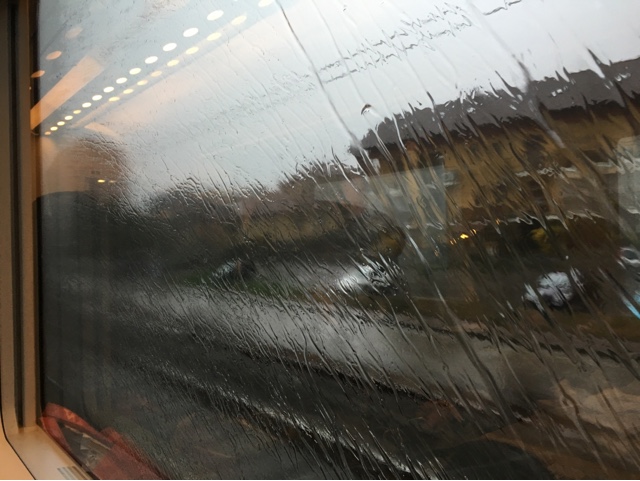 My hotel room in Turin 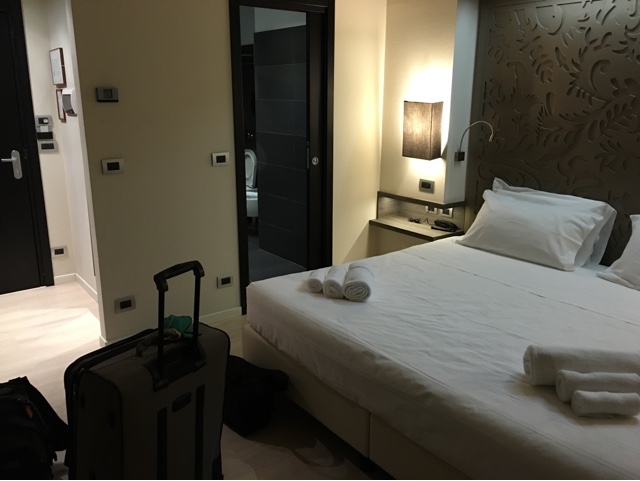 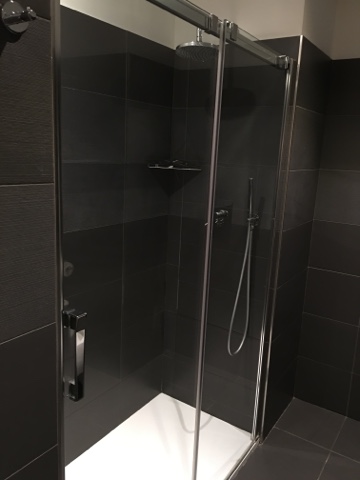 Went for a quick walk around Turin 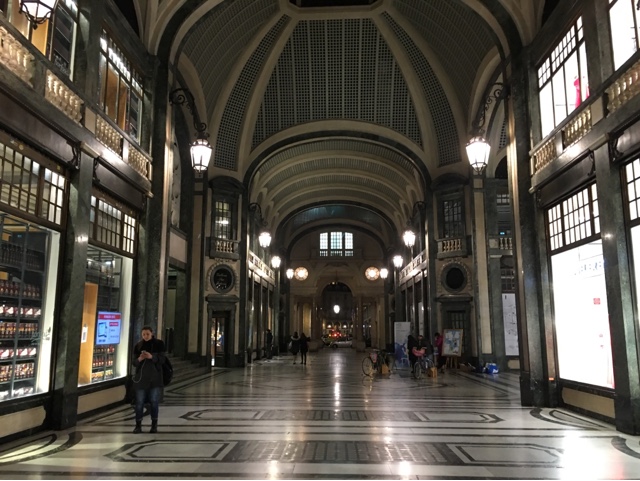 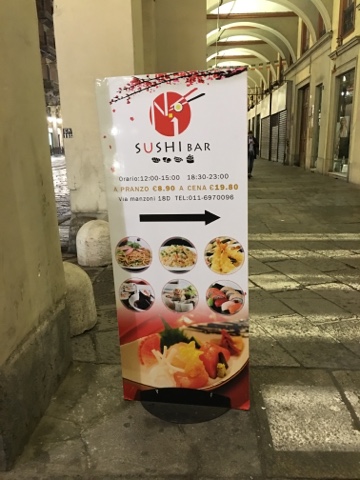 Disappointing though, doesn't rate at all compared to what we can get anywhere in Sydney, and this little bit of chicken cost 6 Euro. 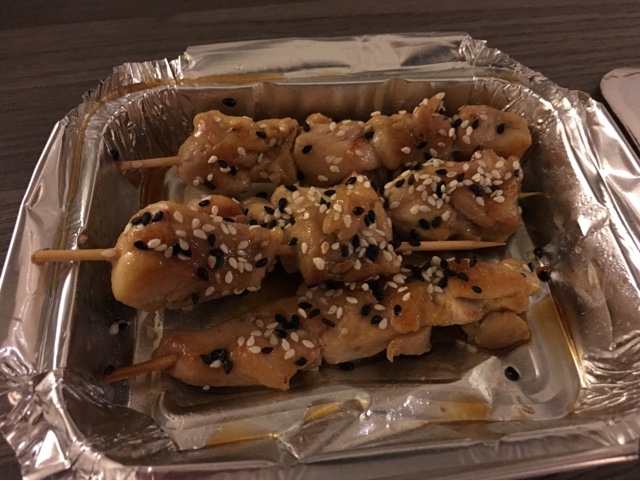 I grabbed a salad too. My first low carb meal in almost 2 weeks. 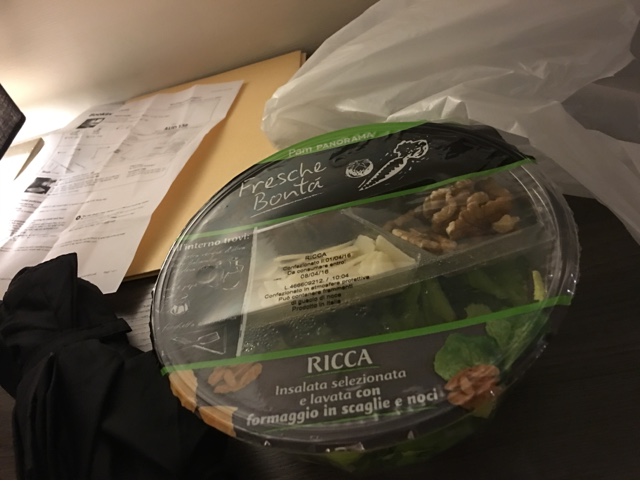