The rest of the family arrived today (see my coffee report for the full details) and we got back to the apartment around 12pm and had a bit of relax time before heading out for a bit of a wander. Didn't get much further than the supermarket where we decided to pick up some French produce and treats and have lunch back in the apartment. I've never bought pre-made soup in a glass bottle, but it was absolutely delicious, as were the baguettes.

Cruising around the supermarket a nice French elderly lady started asking me questions about an Apricot Jam jar in French, which of course I didn't understand a word of, but when I explained in broken French that I only spoke english she pointed to her glasses, eyes and the jar and it was obvious she couldn't read the writing. Even taking a photo of it and enlarging it didn't help, so google translate to the rescue and I let it explain that the jar was "Confiture d'apricot".

After lunch we headed up the hill to see the Scare Coeur, which is the church that we get such a fantastic view of from our windows. Its a very steep hill, so there is also Funicular railway that goes up to the top. We sucked it up and took the steps. The view from the top is spectacular, my only regret is that I didn't head up there this morning, as what was a fantastic day didn't stay they way and it started raining this afternoon. We went inside the Sacre Coeur had a look around then checked out the shops in area. There was a scale model of the Sacre Coeur inside, however as Sharon pointed out, it wasn't a true representation as it didn't include the multitude of selfie stick sellers hanging around the building. (What did all these guys do before selfie sticks were invented ?). One of the great things about being in an apartment that overlooks this monument is that navigation from anywhere home is easy, as was telling the taxi drivers where we wanted to go.

It must be my day for helping random French citizens, at the top where the Funicular starts from, a lady asked me in French how to use the machine to buy tickets, which of course I had no idea what she wanted until I explained that I only spoke english, at which point she switched to perfect english and I was able to help her and her husband buy tickets to take the trip down. We also headed down as it had started raining. We made yet another stop at the small supermarket to buy fruit juice and I picked up some L'Equipe papers for one of my colleagues back in the office (Hello Mark!).

Another short break back in the apartment and it was time to head out for dinner, and this is where the cat comes into the story. We settled into this nice little restaurant on a corner only a block or two away from the apartment, a smallish place that looked warm, homily and very inviting. We had sat down near the window, Sharon and Paul had just finished their first courses and Emma pointed out in a surprised tone that a kitten had appeared from under the table and parked itself on her jacket. It had taken a liking to Emma and for the next few minutes entertained us with its attempts to get at our food after it had been served. After a while the cats owner (one of the chefs) came and collected the cat and the kitten was not at all happy about being taken away from its new friend.

Dinner was fantastic, Sharon and I both had steak dinners, Paul had a duck dish and Emma had a lamb dish. Much cheaper than I was expecting too, for the 4 meals (Sharon and Paul both had three courses), the total bill was €65. On par or even cheaper than what we were spending in Italy.

Tomorrow we are off to see the Eiffel tower and some of the other usual Paris sights. 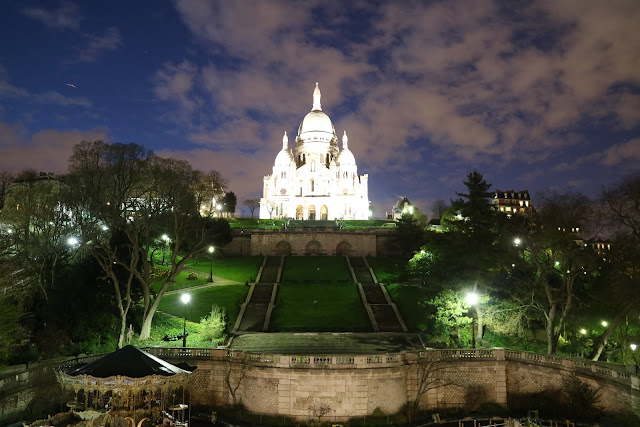 Its not raspberry and this is not a second hand store... 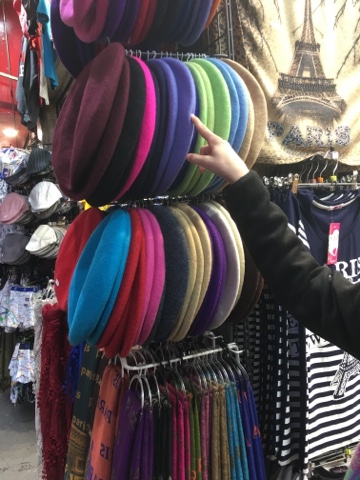 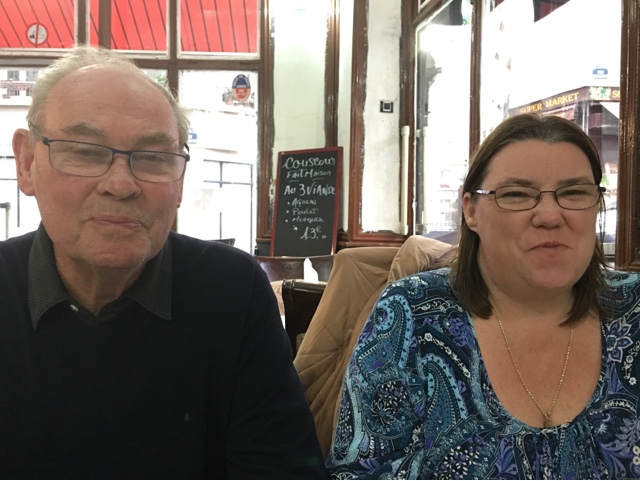 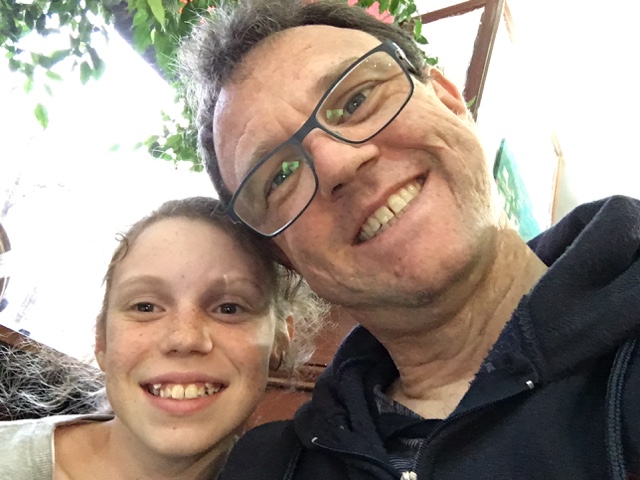 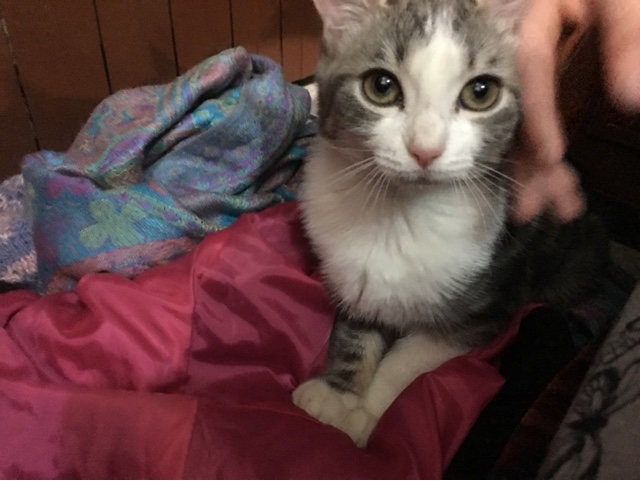 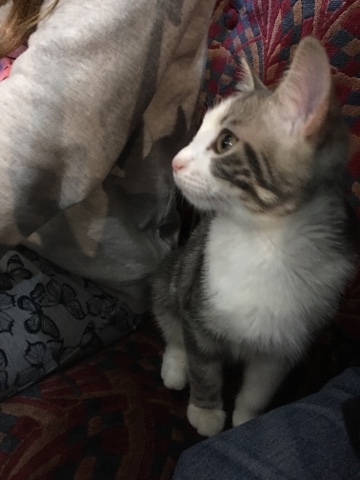 At this point the owner of the kitty took her away. 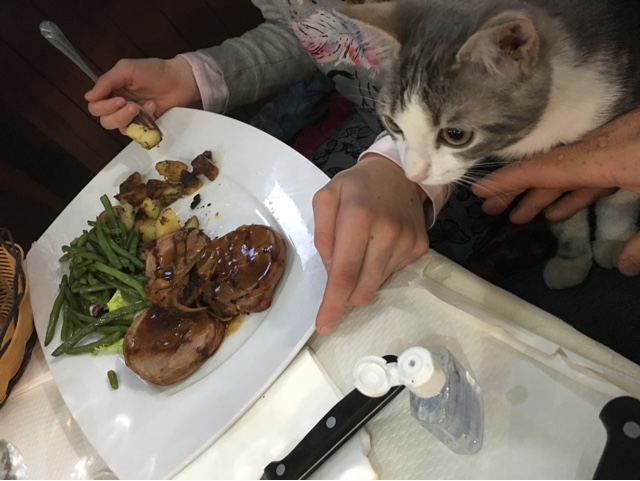 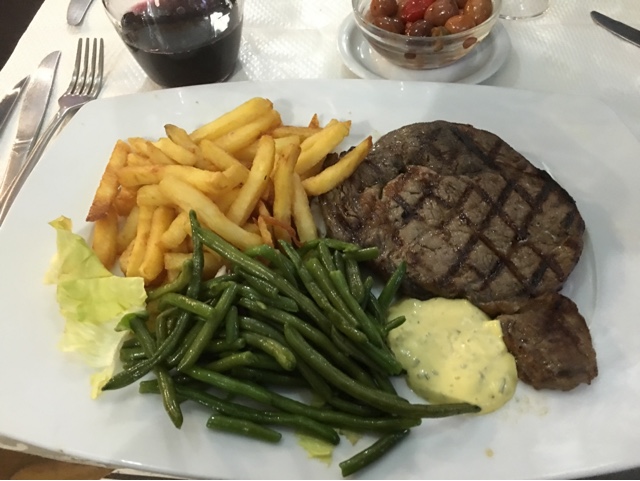 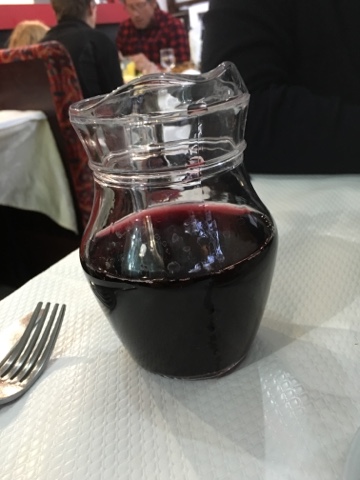 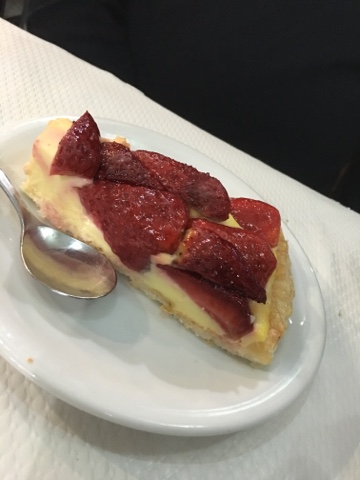 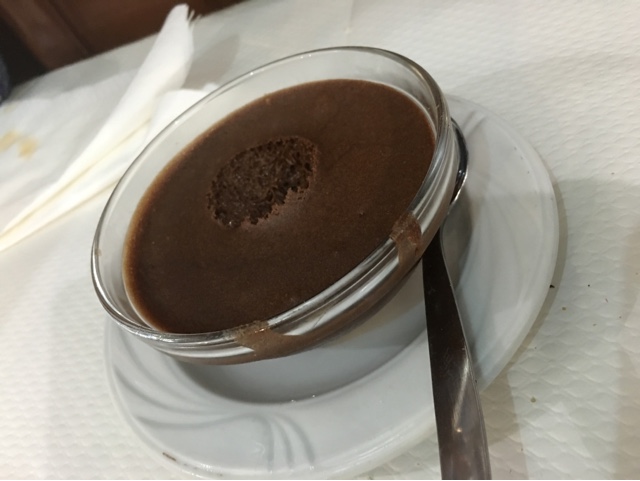 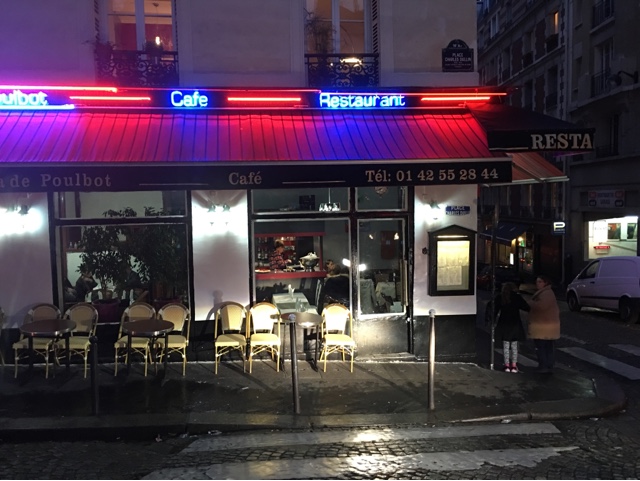 These are just everywhere 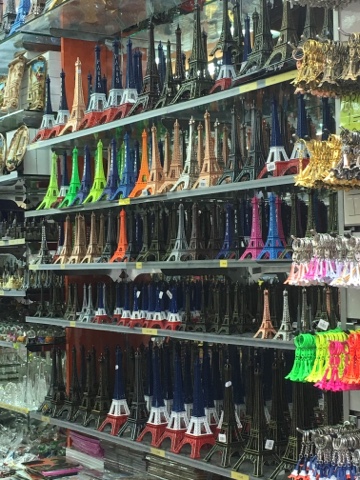 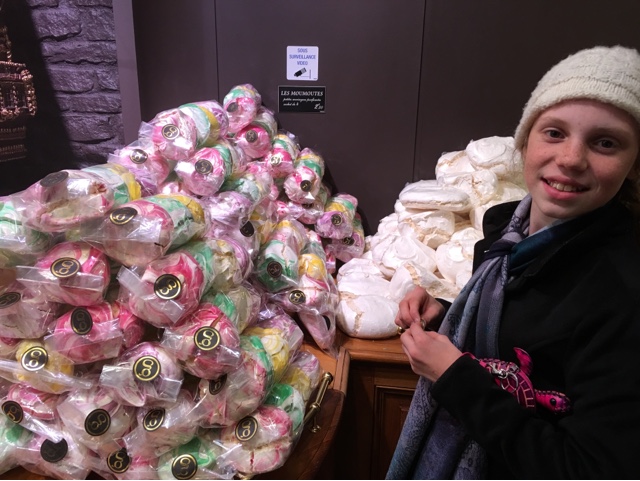 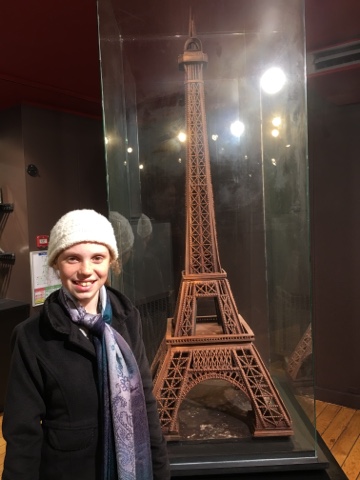 Like Italy, peanut butter just isn't a big thing here. 4 shelves of mayo, yet only 2 brands of peanut butter. 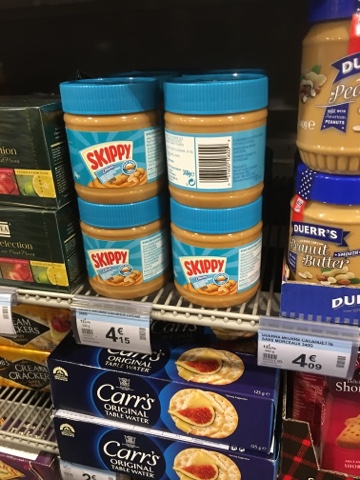 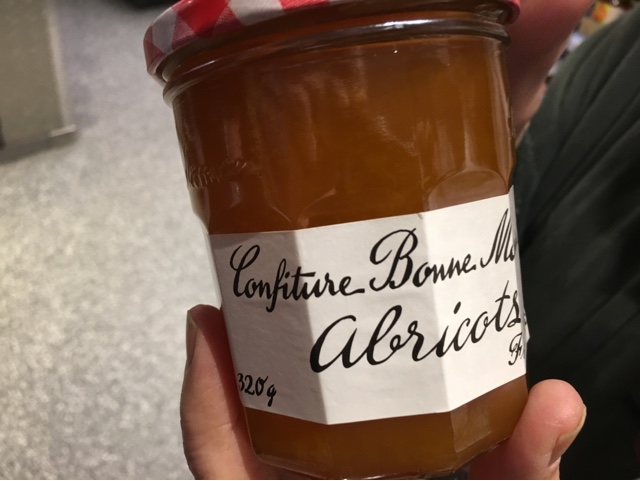 Never expected to see this in France. 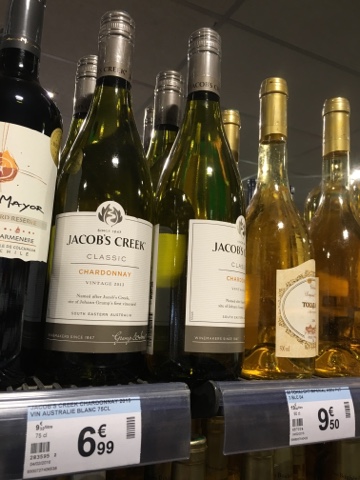 Our scoop from the supermarket 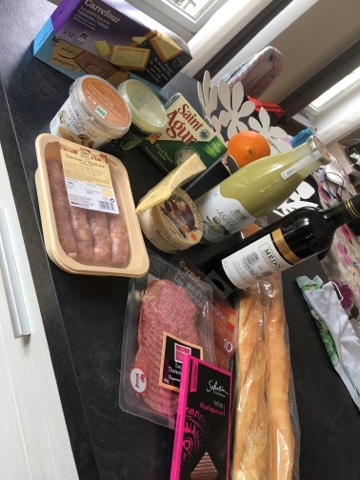 View from the Sacre-Coeur. Our apartment block is in the centre. 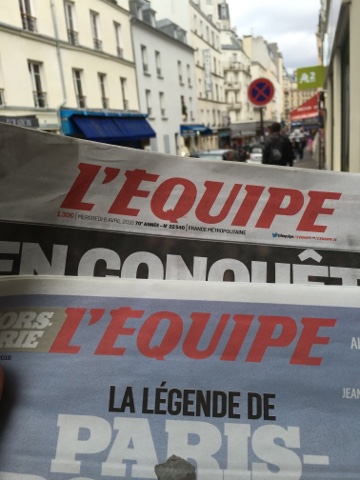 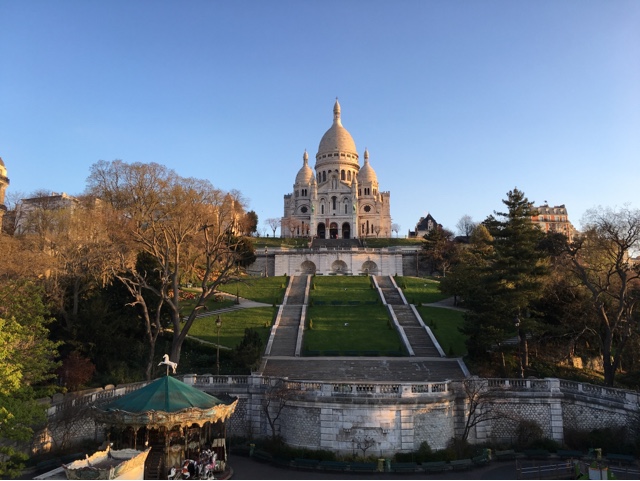 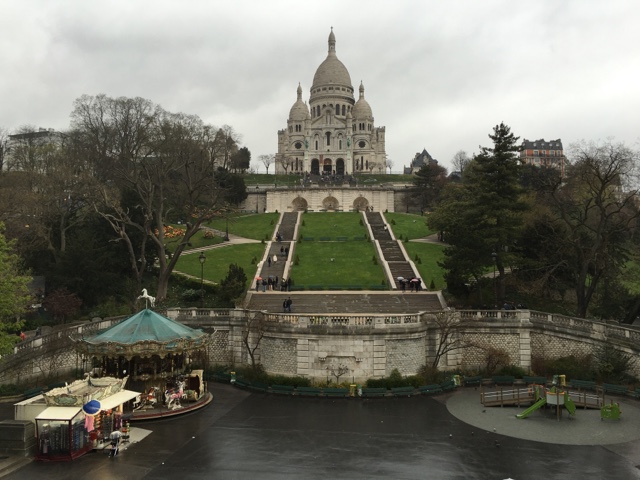